I was first introduced to the cutting-edge work the A/E firm, Bryden Wood, is doing in AEC technology at the August 2020 event of the San Francisco Computational Design Institute (SFSDI), in a presentation by Phil Langley who leads this work at Bryden Wood. More recently, I had the opportunity to learn more about it at the April 2021 Glimpses of the Future event, presented by Jaimie Johnston of the firm. It was fascinating to learn about the innovative tools for design automation and industrialized construction being developed by the firm, showing that AEC firms do not always have to rely on software vendors for pushing the state of the art of technology in the field. They can take the lead on this themselves.

This article takes a closer look at some of the technologies being developed by Bryden Wood.

Bryden Wood was founded in 1995 as an architecture firm and has grown into a 200+ strong integrated design and operations consultancy for the built environment. It is headquartered in London with offices also in Barcelona, Milan, Singapore, and St Albans, and it works on a wide variety of projects in different sectors. The firm started a dedicated group for technology development a few years ago, focused on improving design and construction through two main avenues: one, automating design by capturing rules and logic; and two, making construction faster and more efficient by applying manufacturing principles to it. In this endeavor, it is in sync with the UK government, which has been pushing for increased technology adoption in the country’s construction industry with BIM mandates and initiatives like the Construction Innovation Hub and the Center for Digital Build Britain.

There are a couple of key aspects underlying Bryden Wood’s approach to its technology solutions that I thought were particularly interesting. The first is that it looks for the common rules and patterns across its work in different sectors such as residential, education, health care, and infrastructure rather than focusing on the differences between them. These rules and patterns are captured into the algorithms driving the automation in its design tools — it is what makes them “smart.” The second is that it sees Data rather than BIM at the center of AEC technology (see Figure 1), with BIM now being one of the “views” of the Data, similar to, for example, AR+VR and IoT. 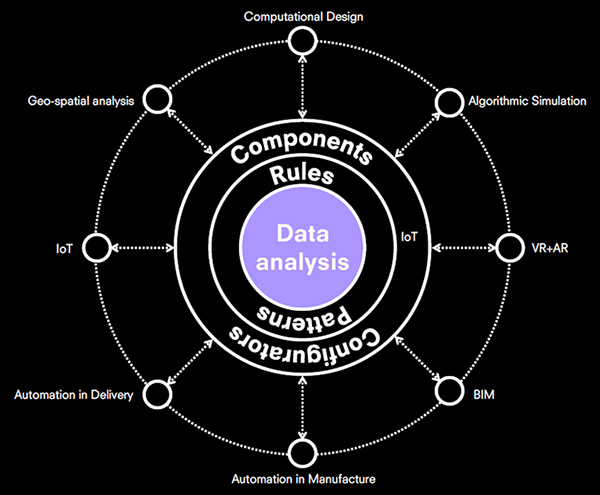 Automating any aspect of design involves capturing the rules and logic underlying it and translating them into the algorithms that are used to create a computer application or mobile app for it. The idea is to automate mundane tasks that are tedious and time-consuming, freeing the designers to do the more challenging, high-level, value-adding tasks that are better suited to their capabilities. An excellent example of this is an application Bryden Wood developed for smart motorway design for Highways England. You can select a section of the motorway that has to be designed, and the application automatically places features such as gantries, walls, signage, emergency refuge areas, etc., along its length, taking into account aspects such as the curvature and gradient of the motorway, visibility along it, etc. (Figure 2). It does this by capturing and encoding the established rules of motorway design and its constituent components, and how they relate to each other and to the motorway as a whole. With the application, the time required to design a motorway can be cut dramatically, from several months to just a day or two. Bryden Wood has also developed a similar app for accelerating the design process of alignments on a railway network. 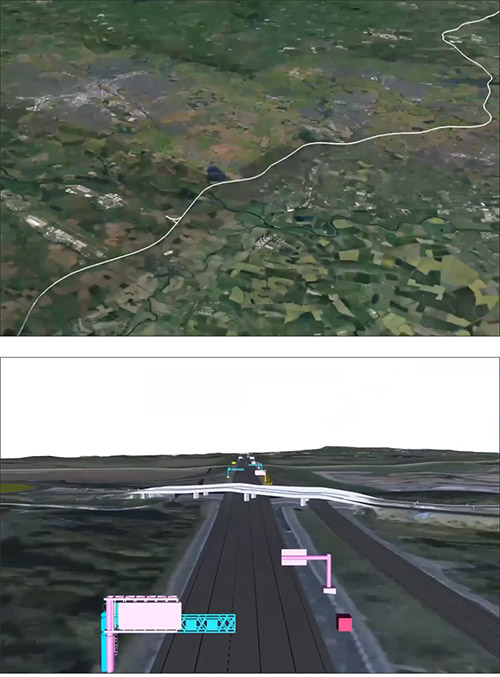 Figure 2. The app for automated motorway design, which automatically places motorway features along a selected stretch of the motorway to be designed.

Bryden Wood has developed similar applications in the field of building design as well. An example is the Seismic school design app, developed for the Department for Education in the UK. There are very strict regulations around space standards — including areas and adjacencies — and other requirements for primary schools in the UK, and these have been encoded in the app, so that the only designs you can create with it are those that comply with the regulations. The app is free, open-source, and easy to use, allowing a school to be designed in a matter of minutes – you simply choose your location and school type, and you can then start placing pre-configured clusters of classrooms and support spaces to build out the design (Figure 3). The built-in rules prevent non-compliant actions, for example, you cannot place a classroom above a sports hall. The pre-configured spaces have all the details built in, so that the design can be exported to a BIM model for further development when finished. 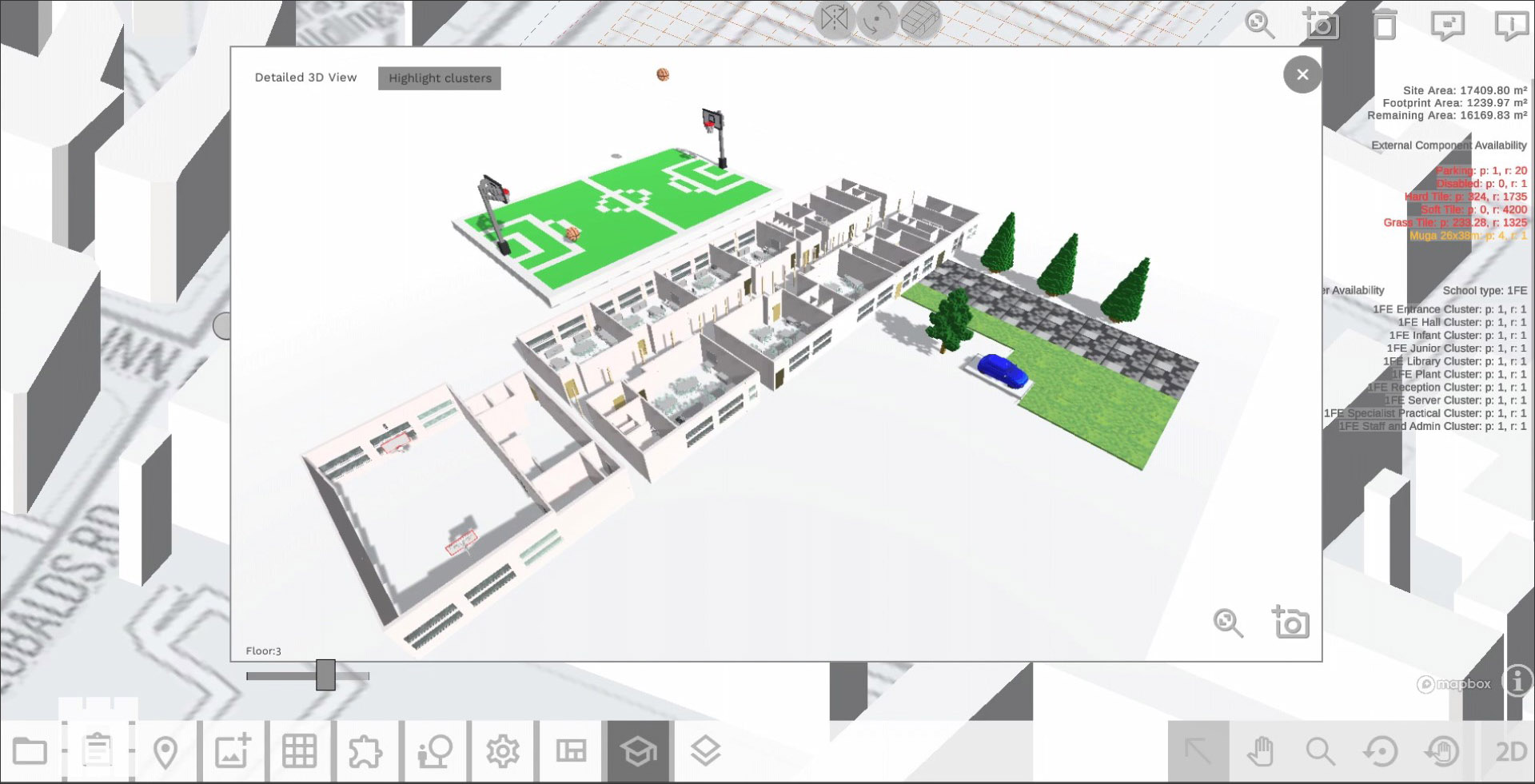 Figure 3. Designing a school with the Seismic app.

In order to ensure that the app was easy to use, Bryden Wood even tested it with school kids, who had fun using it as a design exercise for designing their schools (Figure 4). They reportedly found it even better than Minecraft, which is high praise indeed!

Another example of automated design developed by Bryden Wood for a different domain is the PRiSM app. The domain here is the design of precision manufactured housing (PMH) for London, which is an initiative that is intended to address London’s housing crisis by building a large number of affordable homes using modern methods of construction. The idea of the app is to make PMH more accessible, to enable creating viable designs for new PMH developments in minutes. It works by encoding London’s spatial planning rules and combining them with precision manufacturer expertise. It is free and open-source like the school app and follows a similar methodology: you start by selecting a site anywhere in London, and then choose the kind of building you want, including the number of floors and the apartment mix. You can also choose to specify the type of PMH system you want to use. The app provides you with a number of viable designs for the specified options, and you can continue to iterate, explore, and reconfigure until you create a satisfactory design (Figure 5). The app alerts you to potential planning issues so you can make the necessary adjustments, and it also brings in the neighborhood data to provide context and assess buildability. And as with the school app, you can export the design to a BIM model for further development. 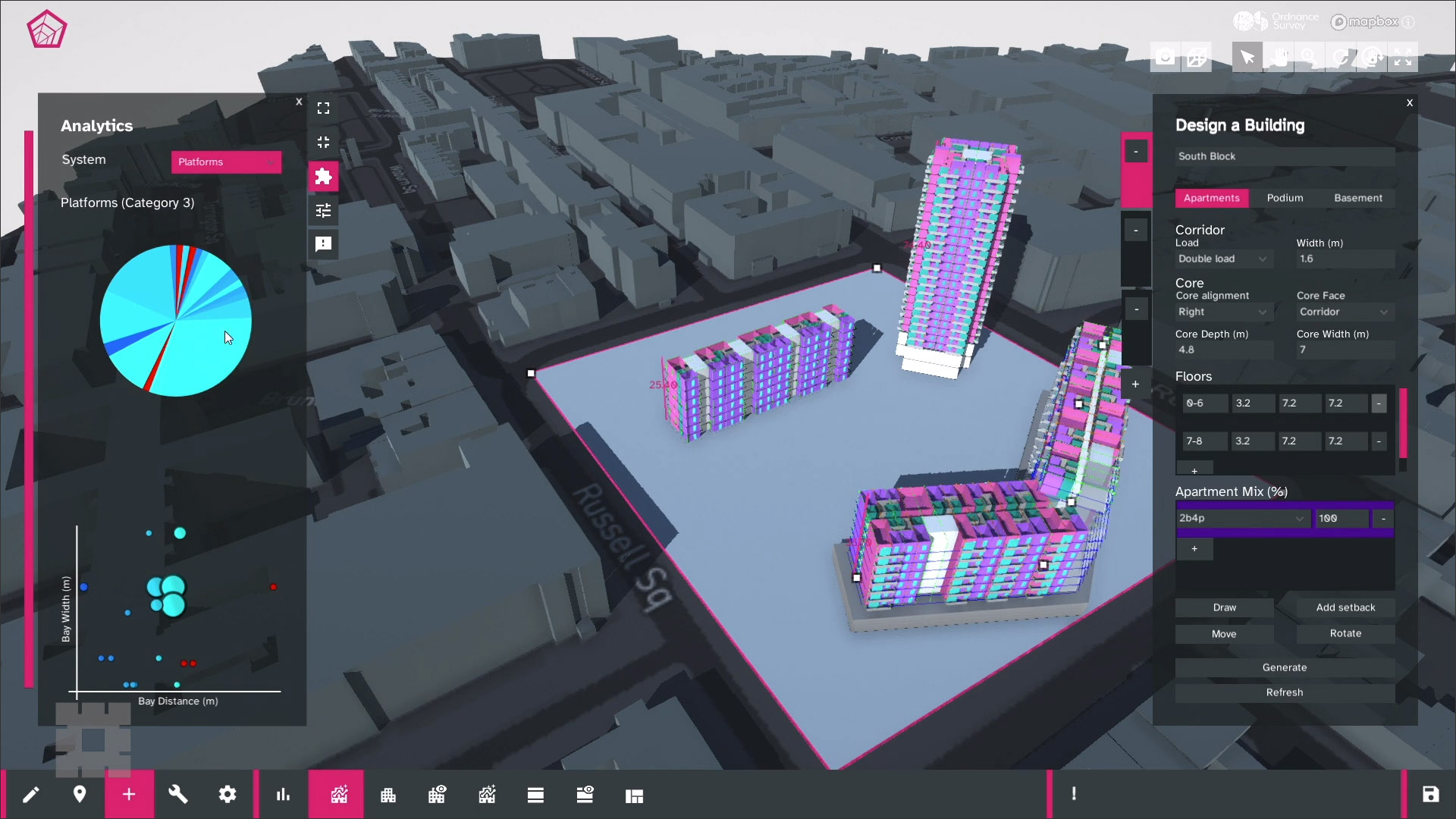 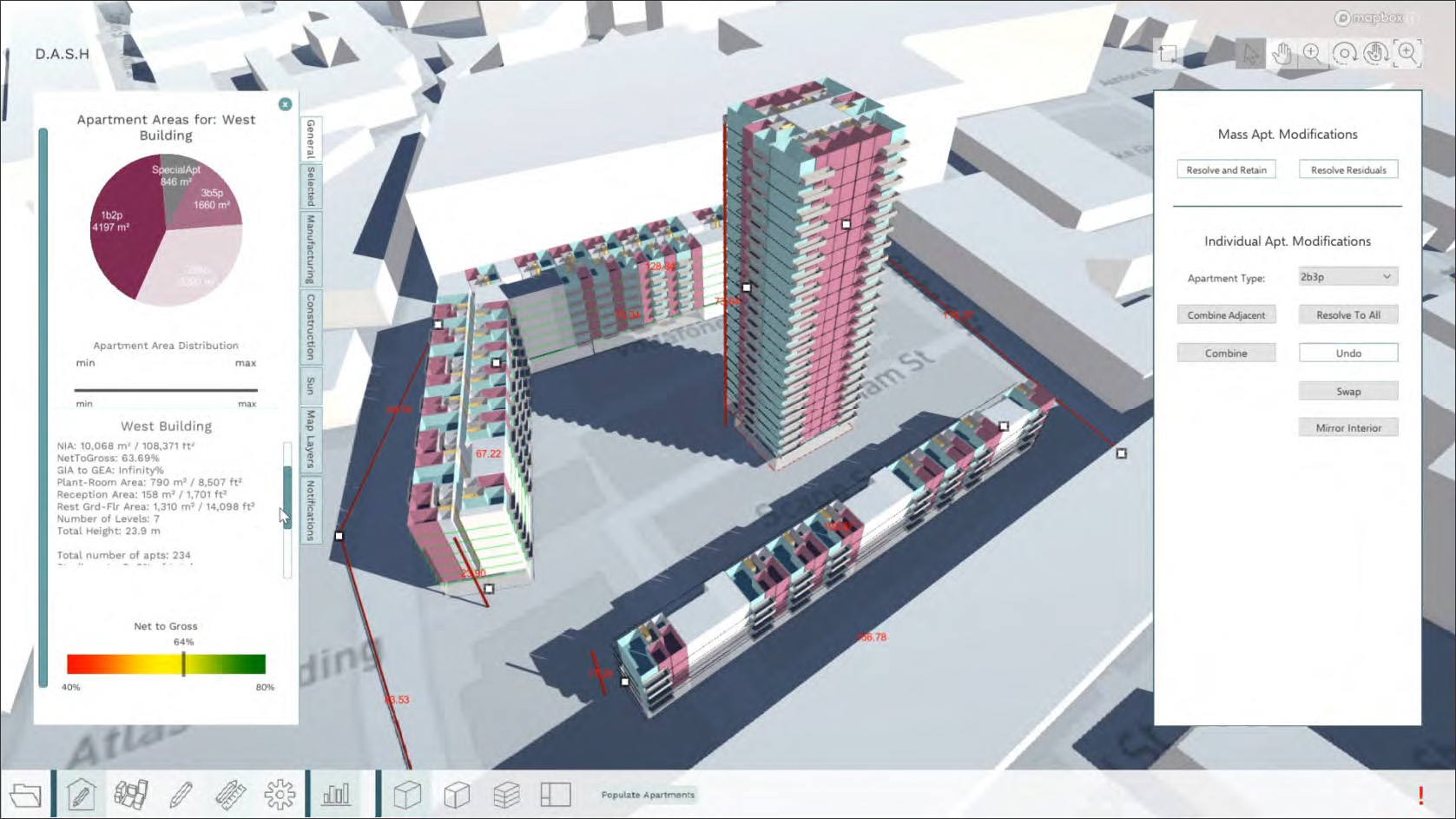 Figure 5. Designing a PMH housing development with the PRiSM app.

Bringing the benefits of manufacturing to construction has always been on the top of the agenda whenever there is any discussion of improving construction, and the solution to it has commonly been seen as an increase in off-site prefabrication – mass-producing components in factories and assembling them on site. Of course, there are challenges to doing this, but they seem to be more logistical than technological. This is why I was especially intrigued by another approach to industrialized construction that Bryden Wood is proposing – bringing the prefabrication to the building site, or in other words, converting the site itself to a factory for building the building.

Bryden Wood demonstrated this approach in a prototype project located in Petersfield, Hampshire, working in collaboration with offsite specialist Easi-Space. Rather than using pre-assembled components, the individual components for the structure were assembled on site, with the use of color coding for easy identification and simple processes for connecting them (Figure 6). There was some level of automation, but for the most part, the assembly was done on site, including the pouring of the concrete for the slabs. This avoided the need to use precast slabs, which would have required a precast factory to be available from which the precast component would have to be transported to the site. In addition to dramatically increased speed and efficiency — the time for the construction was being measured in minutes rather than hours or days — there were many overall benefits from this “factory on site” approach, which are captured in the graphic in Figure 7. These benefits were further extended by having an MEP kit-of-parts and a Façade kit-of-parts (Figure 8), both of which could “clip in” very easily once the superstructure was done. 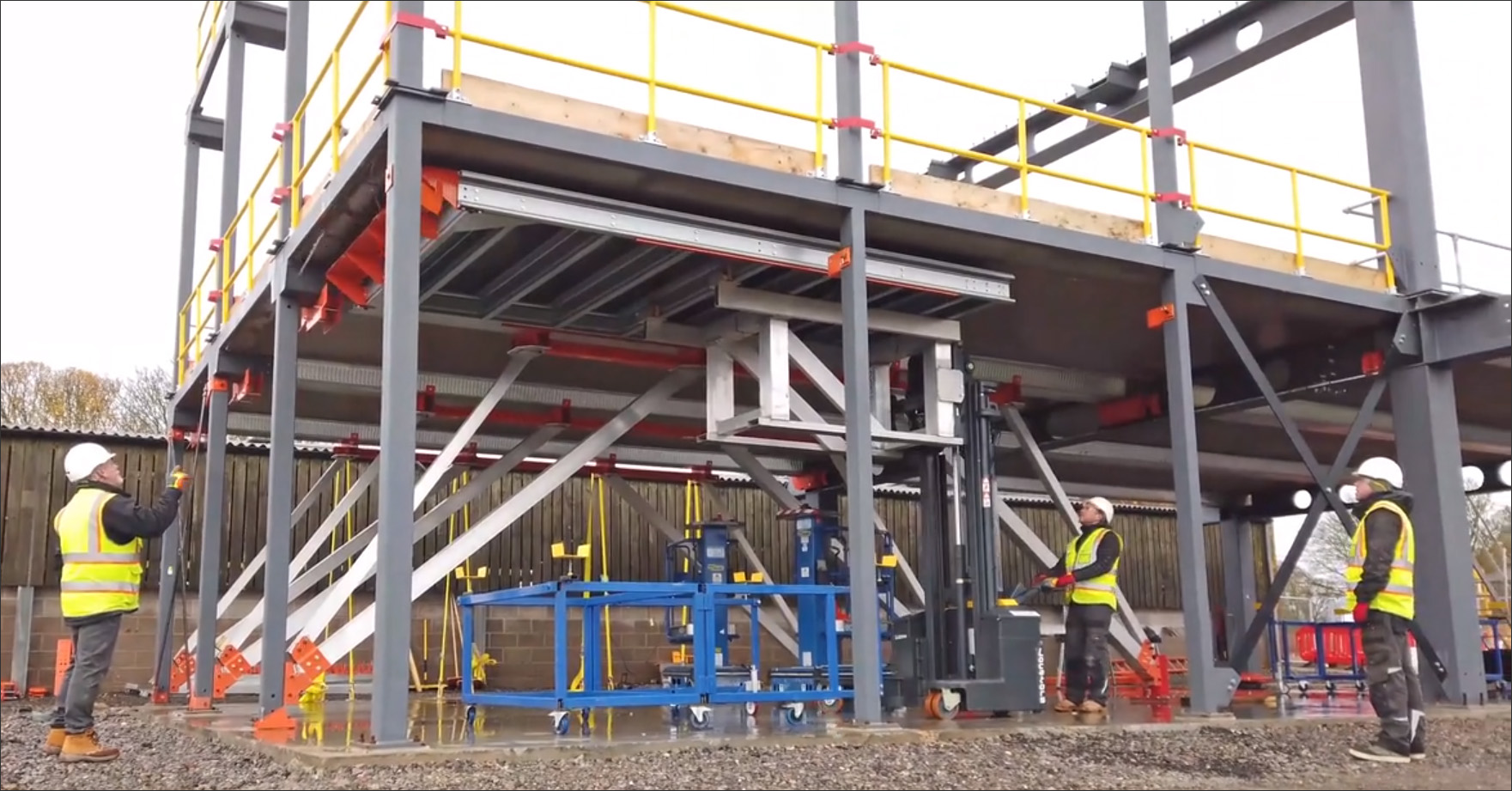 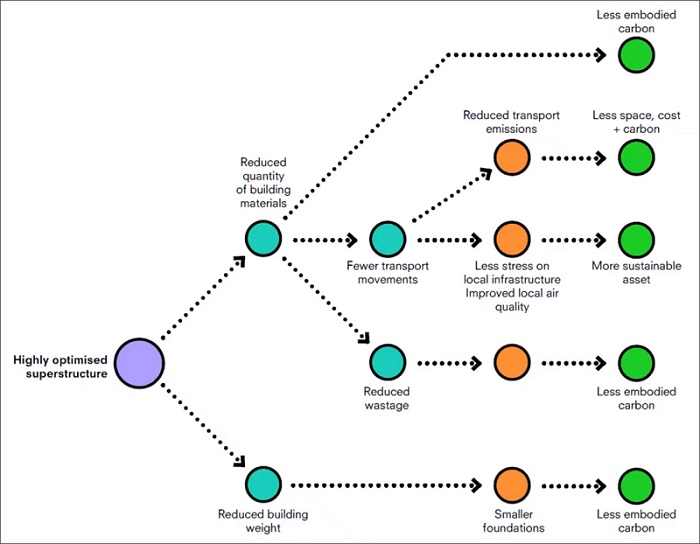 Figure 7. The benefits of optimizing the construction with the “factory on site” approach. 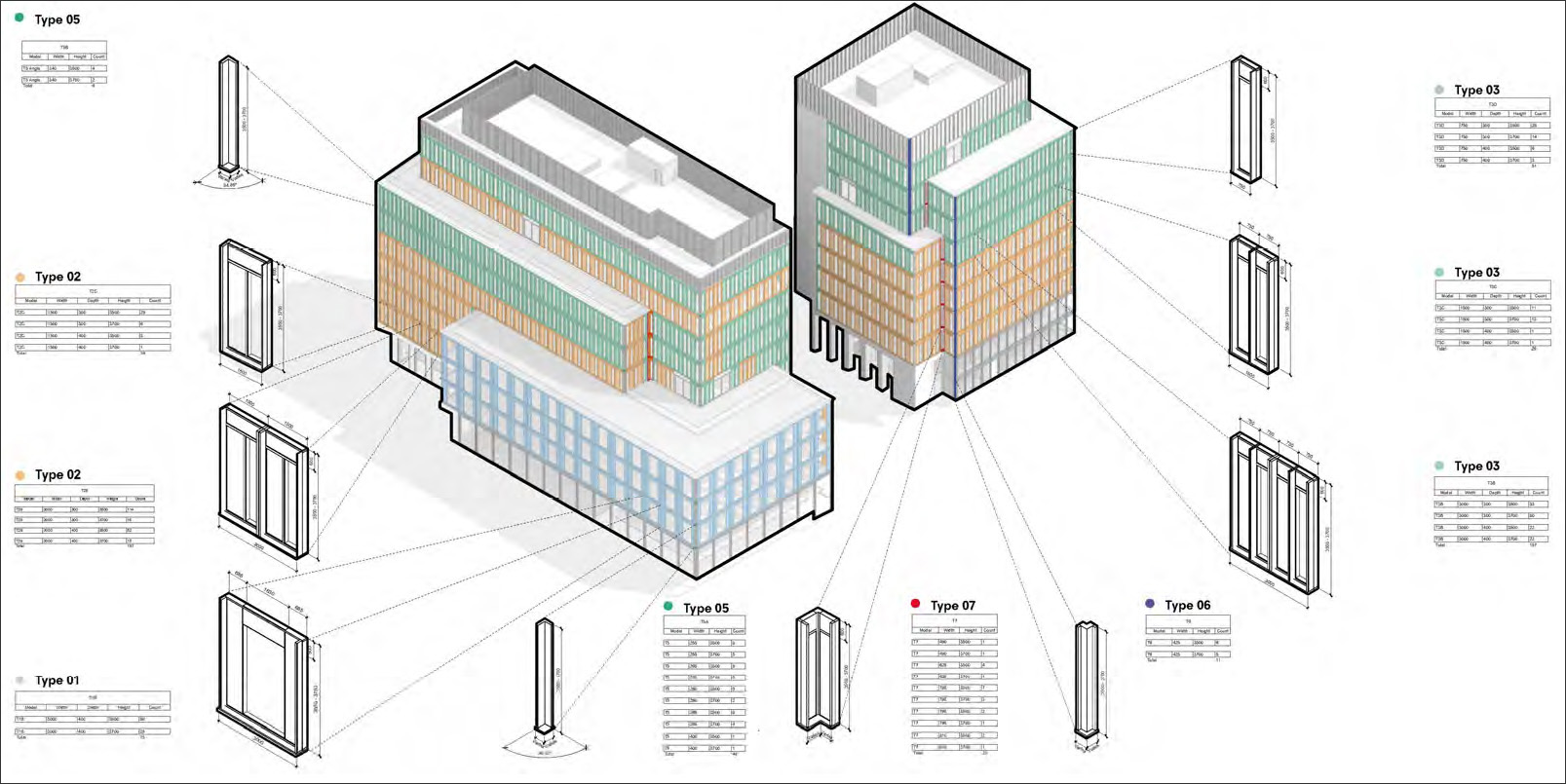 Figure 8. The Façade kit of parts that is quickly attached to the superstructure.

Automating design — at least the mundane and repetitive parts of it — is the key to making computational tools smarter, and it seemed like this was gaining momentum in the AEC industry years ago with tools such as Bluethink House Designer and SITEOPS, both of which used rule-based technology. However, rather than these tools opening the floodgates as I had expected, examples of automated design were few and far between, especially for building design (see my 2015 article, “Why Isn't There a Smarter BIM Tool for Building Design, Yet?”). This is why I was doubly excited to see Bryden Wood’s automated design tools for houses and schools as well for motorways and railways. About time!

I also found its approach towards industrialized construction, where the factory is brought to the site instead of the more conventional off-site prefabrication approach, an innovative take which might just take hold in the construction industry. In addition to making construction faster and more efficient — which has always been the holy grail — the “factory on site” approach seems to face far less logistical challenges to being implemented (as the recent collapse of the high-profile off-site construction company, Katerra, portends).

In addition to the innovative culture of the company and its initiative in putting together an in-house “Creative Technologies” team to develop the computational tools they envision, I think a lot of credit also goes to the UK government for encouraging and nurturing these initiatives. It goes to show that without a strong government mandate for technology adoption — a lot of Bryden Wood’s technology development was done with the help of “Innovate UK” grants — the AEC industry in any country cannot make as much progress on the technology front as it has the potential for. 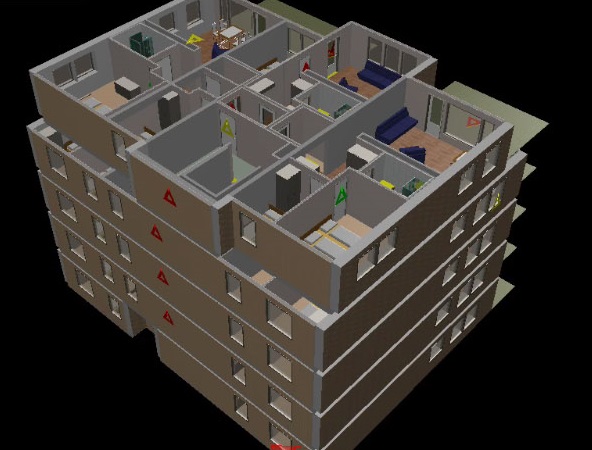 This article explores the rule-based design technology of Bluethink House Designer, developed for one of the largest home building companies in Norway. It looks at how this application automatically applies embedded knowledge to support design and analysis. 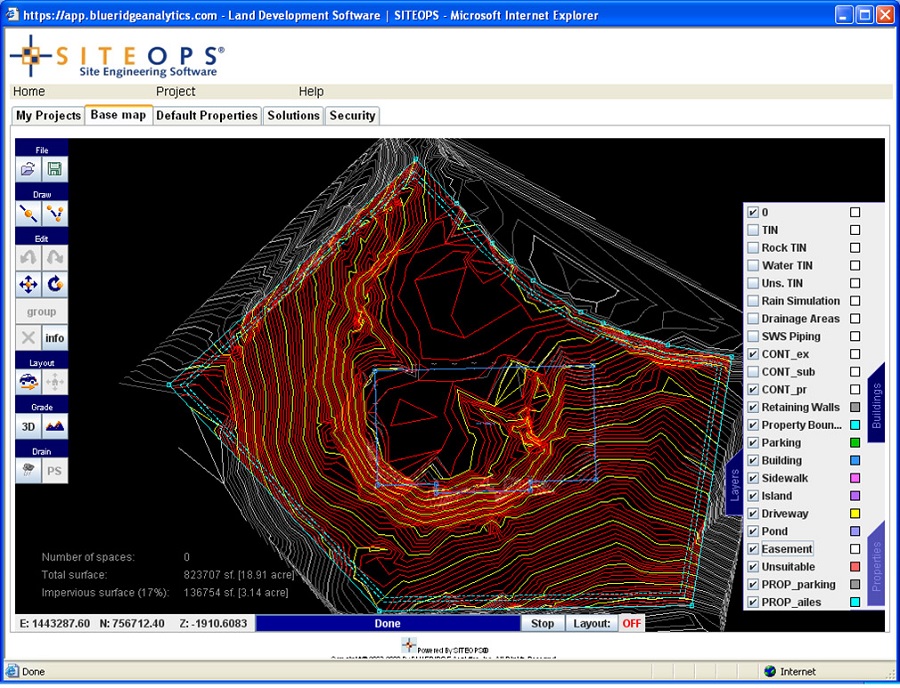 This article looks at the application of evolutionary computing technology -- which uses optimization to find the most effective solutions to a problem given a set of constraints -- to the field of site design and land development in SITEOPS. 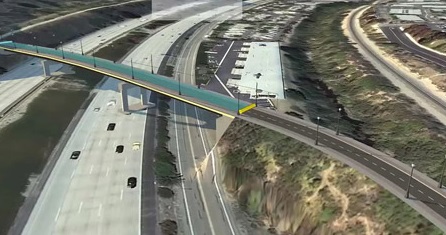 Why Isn't There a Smarter BIM Tool for Building Design, Yet?

The Viewpoint article questions why we still don’t have a smart building design tool which does not require us to painstakingly model every detail in our buildings, but can automatically create much of it from a conceptual sketch using a rule-based expert system. 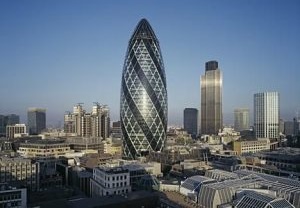