Among the roster of BIM applications used globally, Allplan from the publicly traded Nemetschek Group is close to the top of the list. Headquartered in Germany, similar to its parent company, Allplan has had a strong European presence for decades—Nemetschek was founded all the way back in 1963 as an “engineering firm for the construction industry” and Allplan was its main product. Given its long history in the AEC industry, its tools and capabilities have been honed over decades of deployment and development, making it one of the most comprehensive applications for detailed design and construction. In 2008, ALLPLAN became a subsidiary company of the Nemetschek Group, which continues to expand its product portfolio through strategic acquisitions and includes leading applications such as ARCHICAD, Vectorworks, SCIA, Solibri, Bluebeam, Drofus, MAXON, and just earlier this month, the structural engineering application, RISA.

I last reviewed Allplan in 2013, and given the number of releases between then and now—Allplan has an annual release cycle—an indepth look at the 2018 version that has just been released seems a good way to get up-to-date on the capabilities of one of the leading BIM applications in the AEC industry. While this review focuses primarily on the updates in the application compared to when I last reviewed it, a comprehensive overview of the application can be found in the BIM Study Evaluation Report published in 2010, where Allplan was one of the six BIM applications reviewed and compared in detail for the AIA Large Firm Round Table (LFRT) CEO Committee. Brief updates on Allplan 2015 and Allplan 2017 also appeared in AECbytes Newsletter #74 and AECbytes Newsletter #81 respectively.

The Allplan product family comprises four main solutions: Allplan Architecture, Allplan Engineering, Allplan Bimplus, and Allplan Allfa. There are also additional add-ons, options, and supporting solutions. Of these, Allplan Architecture and Allplan Engineering are the main BIM applications for architecture and engineering and are integrated in the consolidated Allplan application, enabling both the architectural and engineering models of a project to be created in the same application. Allplan Bimplus is the cloud-based collaboration platform of the application, and Allplan Allfa is a full-fledged CAFM (computer aided facilities management) application for building owners and operators. The additional adds-on include a dedicated suite for site modeling and urban planning, tools for creating workgroups that facilitate multiple team members within an office on a local area network (LAN) to work on a project, and a license management system for optimizing the deployment of multiple Allplan licenses within an office. There is also a dedicated project management platform for construction progress control and tracking of prefabricated parts for projects created with Allplan.

The core Architecture and Engineering solutions have an exhaustive toolset to create detailed models and are being used to implement complex building and infrastructure projects all over the world, as shown in Figure 1. The capabilities of the individual tools for each discipline are similar to those that you would find in other BIM applications. So, for instance, the Wall tool has different geometry options to model the wall and allows you to choose from different wall types from an extensive library. You can also create a custom wall configuration with specific layers and materials. Similarly, the structural models you can create in Allplan would be similar to what you could create in other BIM applications. In fact, the level of detail that can be achieved with Allplan would be similar to a dedicated structural application like Tekla Structures. 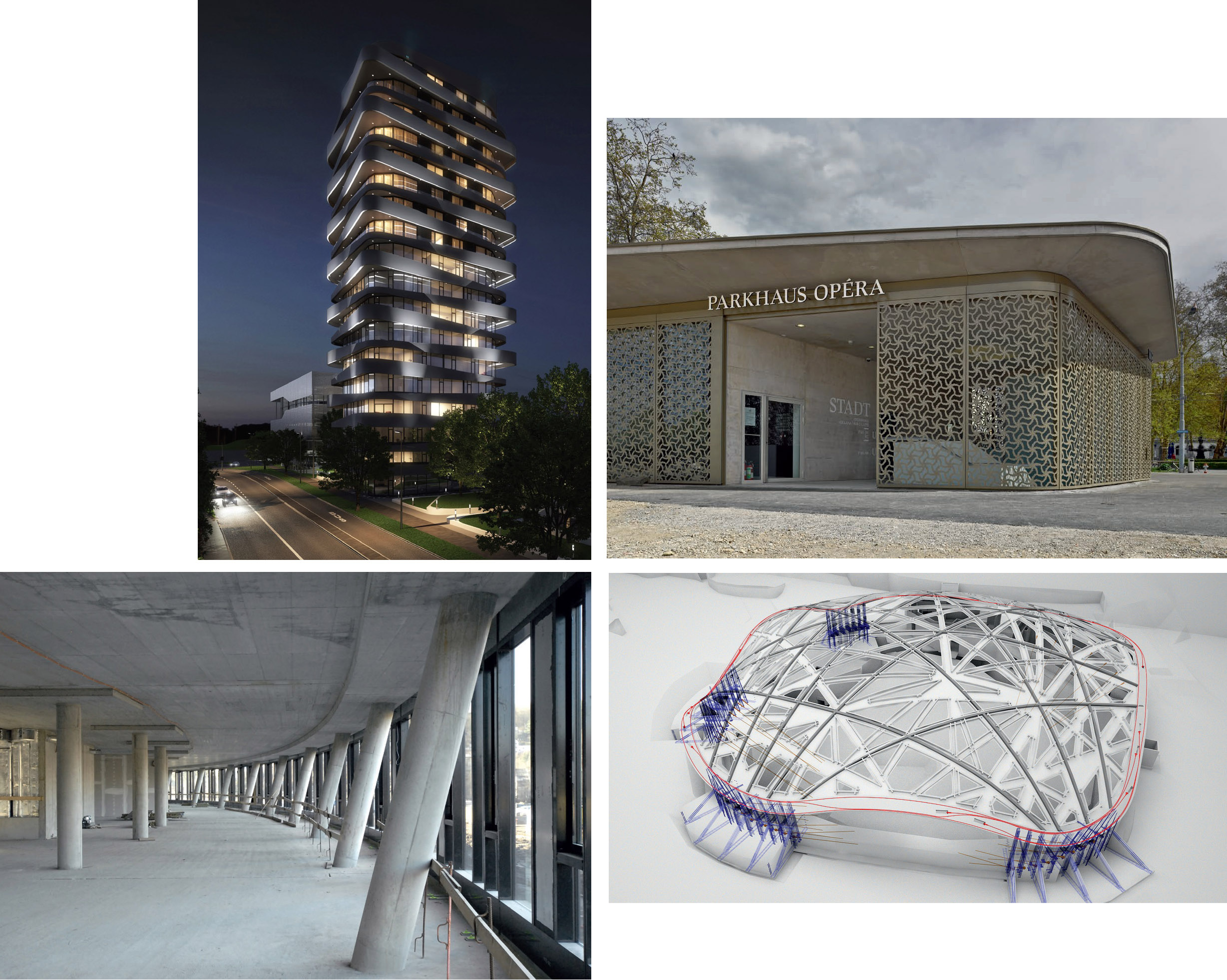 Bimplus is the newest member of the Allplan product family and it provides the cloud-based collaboration platform that is rapidly becoming a critical component of software in any field, not just in AEC. Based on an acquisition Allplan made a couple of years ago, Bimplus allows multi-disciplinary AEC teams to combine models, visualize them,  get detailed information about building elements, and perform clash detection and design coordination (Figure 2). While the idea of a central location for consolidating and sharing BIM models is not new, nor is the ability to facilitate collaboration, coordination, and clash detection on BIM projects, what makes Bimplus unique is that it is a completely open platform, intended to be used as the hub for all OpenBIM applications. While it currently includes direct API-level integration with Allplan that allows Allplan models to be directly published to Bimplus, it also supports formats such as the IFC and BCF (BIM Collaboration Format) that can be used to bring other models to Bimplus. Additional API-level integrations are also planned with other popular applications such as Revit to streamline bringing them to Bimplus.

Figure 2. The cloud-based BIMplus collaboration platform allows multiple models to be brought together. An element can be selected to view its properties in more detail.

Other higher-level aspects of the application that are noteworthy include the availability of a portal called Allplan Connect that provides access via a single login to all software downloads, services, licenses, learning, resources, content, and support. Allplan maintains both a subscription model as well as a perpetual license model (where a copy of the application can be bought outright), giving its users the freedom of choice in whether they would like to rent or buy the application. And finally, when it comes to the project setup, Allplan has a distributed approach like the recently reviewed AECOsim Building Designer, where all the project data is not centralized in one model but distributed across multiple files, which makes it as capable as AECOsim of handling large and complex projects with ease.

Allplan 2018 has a brand-new user interface, which makes one of the key updates in the application visible as soon as it is launched. All the tools are now in a task-specific “Actionbar” at the top, which changes based on the role that is selected as shown in Figure 3. Within the Actionbar for a particular role, tools are collected in different functional groups such as Elements, Modeling, Visualization, etc., for Architecture; Reinforcement, Structural Analysis, etc., for Structure; Terrain, Site Plan, Urban Planning, etc., for Surroundings; and Design, Label, etc., for Draft. The Actionbar can be also be customized as required. 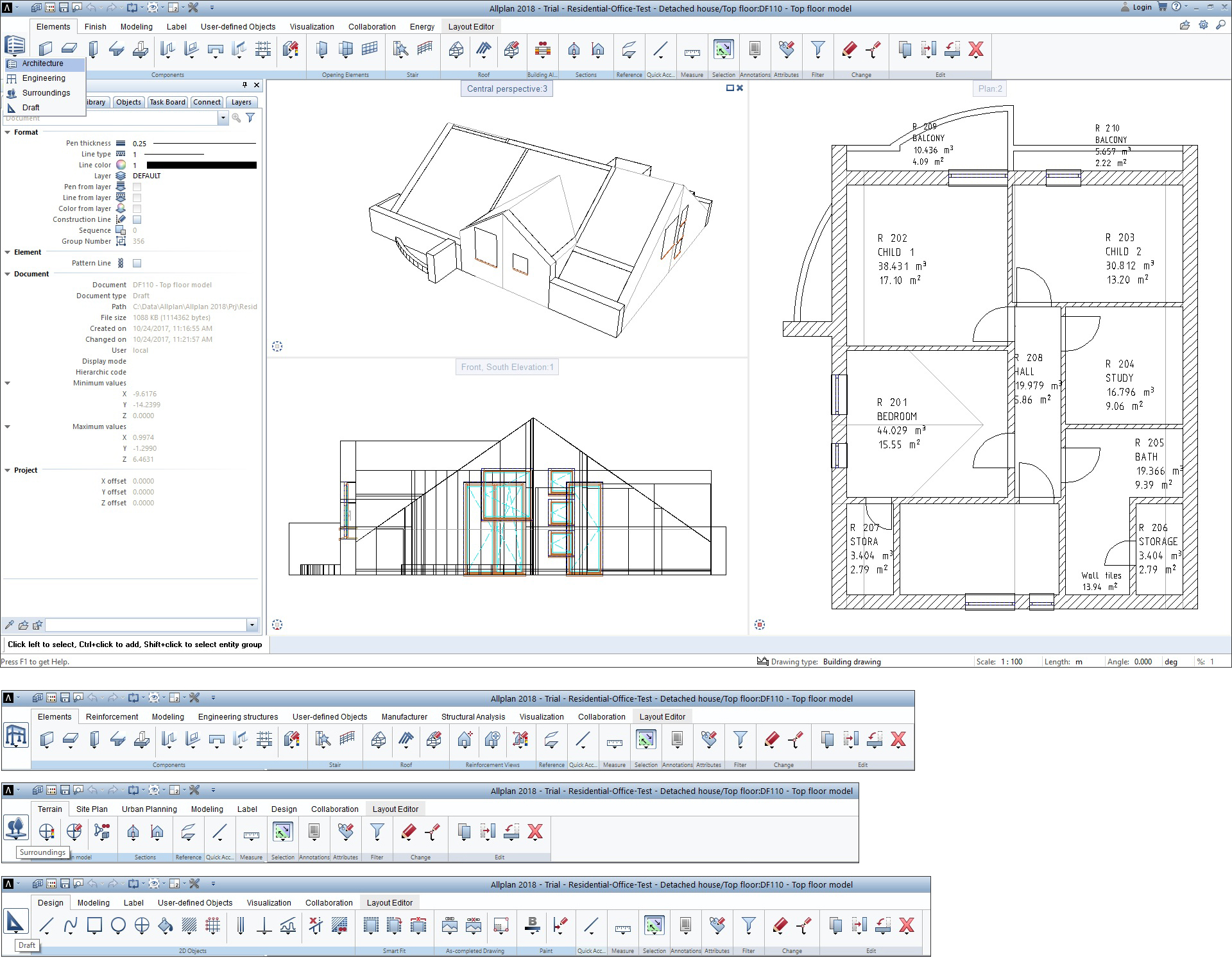 Figure 3. The different tools in the Actionbar, which change depending upon the role that is selected.

The core design capabilities of the application, which were already very extensive, have been strengthened even further with improved freeform modeling including the ability to create curved shapes quickly and flexibly with B-splines. The freeform objects can be designated as BIM objects, making it easier to model organically shaped buildings and infrastructure (Figure 4). Allplan also includes the ability to quickly add reinforcement to freeform structural models, making it easier to create fully detailed models even for infrastructure projects, which frequently have challenging geometry with double curvature and varying cross sections (Figure 5). 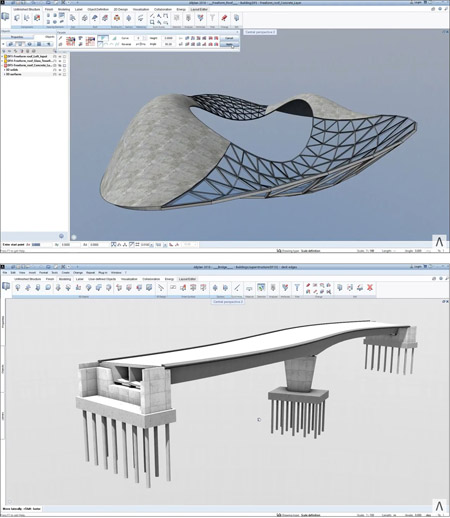 Figure 4. Modeling a freeform roof and curved bridge in Allplan. 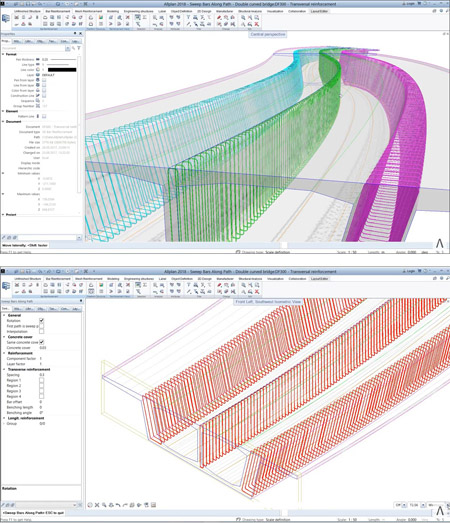 Other significant improvements in Allplan 2018 include advanced visualization based on the CineRender engine from MAXON, another sister Nemetschek company (Figure 6); support of the latest version of the IFC file format, IFC4, which improves the quality and accuracy of the BIM data exported from the application; more efficient internal collaboration with team members as well as external collaboration with the extended product team through Bimplus; and more efficient information management with the ability to centrally define attribute data in BIMplus and then use it in different systems and disciplines that use the collaboration platform (Figure 7). 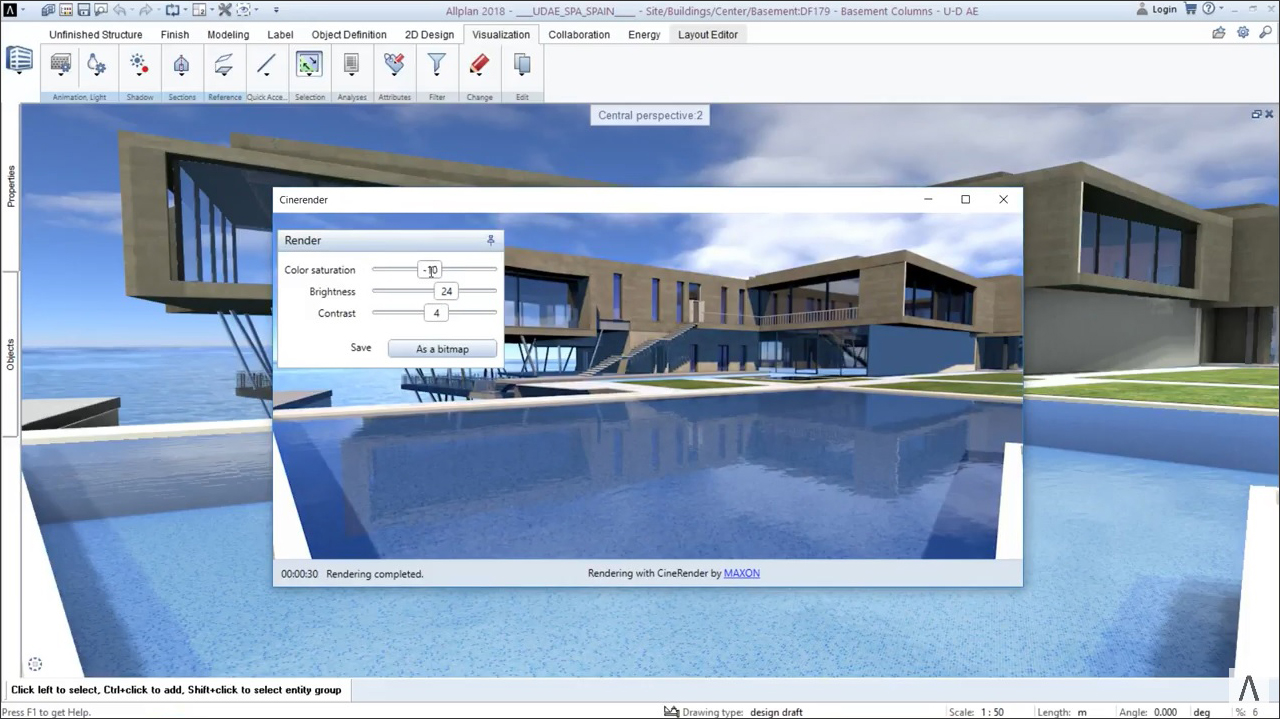 Figure 6. Integration of the CineRender engine from Maxon for more realistic visualizations in Allplan. 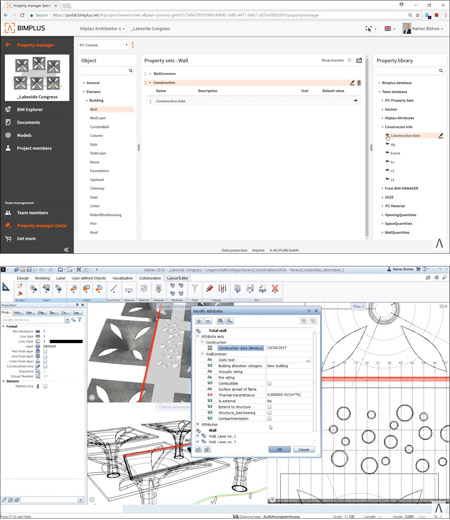 Figure 7. Defining attribute data for a project in Bimplus and subsequently accessing it in Allplan.

Allplan continues to be one of the most comprehensive applications available in the AEC industry with an exhaustive toolset for design and engineering, for buildings as well as for infrastructure. In addition to the full complement of BIM tools, it also has full-fledged 3D modeling and 2D documentation capabilities. The ability to create highly detailed models, with built-in estimation and costing, allows it to be used during the construction phase as well, and with a specialized application for facilities management, it offers an end-to-end solution for the lifecycle of a project. The recent addition of the collaboration portal, Bimplus, allows it go from being a “lone superstar” to a “team player,” enabling its users to benefit from its vast and sophisticated toolset without worrying about how their work would fit into the larger canvas of the extended project team.

Given the sheer number of tools and options in Allplan, the introduction of the Actionbar in the latest version greatly helps to streamline the user interface and make it more intuitive and less overwhelming, in addition to giving the application a more modern look and feel. Also, for an application with a distributed approach to BIM where project setup can be extremely complicated, Allplan does have a unique approach where the entire project structure of a project can be accessed and managed in one interface, as shown in Figure 8. (This interface was described in detail in the Allplan section of the BIM Study Evaluation Report.) While it is extremely challenging for a BIM application with a distributed approach like Allplan to simplify how a project will be set up—given that different parts of the project are in different files, but still have to be related—I hope that ALLPLAN will devote some more development resources to this interface going forward, to make it more intuitive to understand and implement. 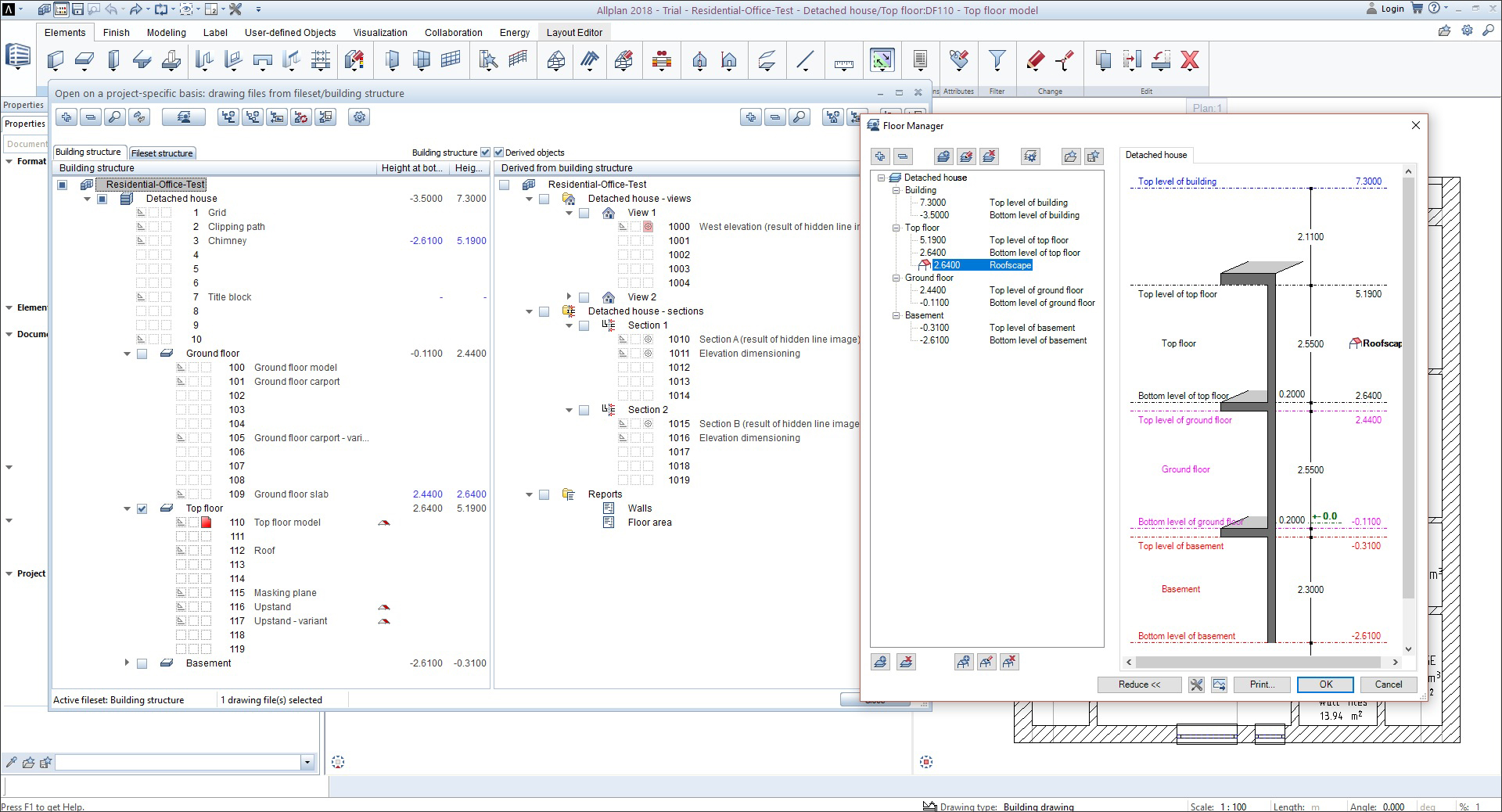 Figure 8. The project setup interface for a building project. The Building Structure on the left shows all the separate files associated with the individual parts of the project. These are related to the Floor Manager shown on the right, where the different levels are defined.

Additional challenges for Allplan include extending the design capabilities of the application to the conceptual modeling of infrastructure, similar to Autodesk InfraWorks and Bentley OpenRoads, to complement its detailed design capabilities for infrastructure projects; and the introduction of more “smarts” to automate repetitive design tasks, like the new rule-based Stair and Railings tools in ARCHICAD 21. And of course, the application needs to move beyond its well-established user base in Europe and broaden its appeal to the global AEC audience, where the need for proven BIM solutions continues to grow to meet the ever-increasing demand for buildings and infrastructure.