I provided a brief overview of the new version of ARCHICAD in my article on GRAPHISOFT’s 2019 KCC event that was held a few months ago, where ARCHICAD 23 was globally launched and we were shown the highlights of the new release. The software is now commercially available, allowing me to work with it and explore the new features in more detail. While there is no single over-riding theme to this year’s release, there are a host of new features for improved modeling, coordination, productivity, and performance, including revamped Beam and Column tools that makes these elements faster to model and fine-tune for all types of structures, a new Opening tool for modeling mechanical voids to improve coordination between architects and engineers, and an initiative to open up the application to more custom development by significantly expanding its APIs.

In ARCHICAD 23, both the Beam and Column tools have been significantly overhauled. Instead of a single monolithic structure, columns and beams are now hierarchical elements that can be composed of sub-elements, each of which can be independently modified, allowing the beam or column to be modeled more precisely as required. An example is shown in Figure 1, where a single beam is split into two sub-elements which are then individually tapered to create a double pitched top geometry that was required in this situation. 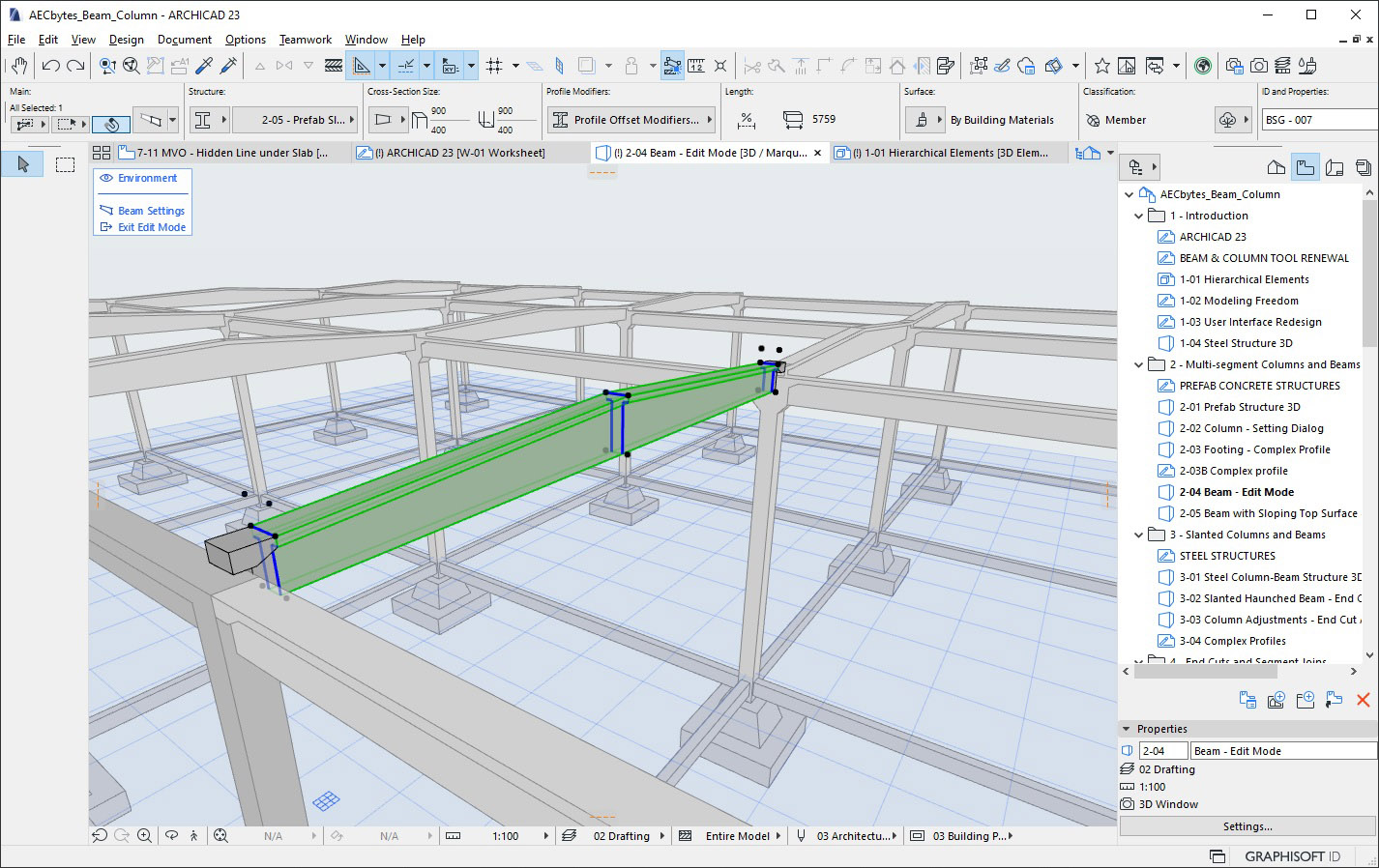 Figure 1. Splitting up a beam element into multiple sub-elements and modifying each sub-element individually.

The Settings dialogs for both the Beam and Column tools have also been expanded to access and further fine-tune the properties of the individual segments. In fact, the segmentation can be done in the dialog itself, as shown in figure 2, where a single column has been segmented into three parts, with the top and bottom parts set to be tapered (Figure 2).You could select different finishes and even different structural types for the individual segments if required. 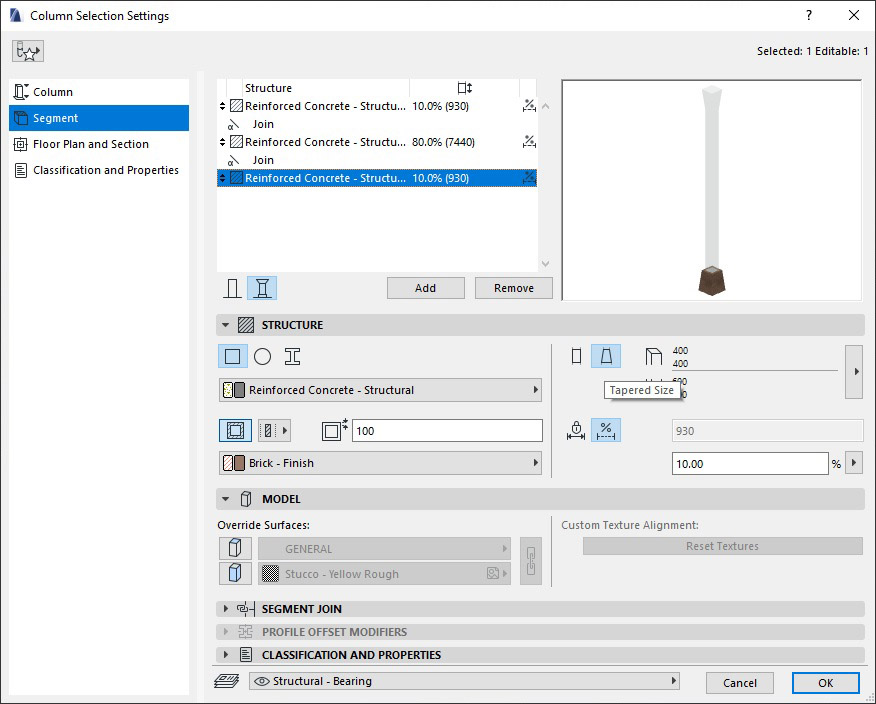 Figure 2. Creating a multi-segment column using its Settings dialog and making any desired changes to the attributes of each segment.

Another significant enhancement in ARCHICAD 23 is the ability to curve beams in the vertical direction, as shown in Figure 3. Previously, beams could only be curved in the horizontal direction. Of course, it was possible to create complex forms like vertically curved beams using the Morph tool (see the archived article, “Using the Morph Tool to Create Custom Objects in ArchiCAD”), but with the ability to do this now built into the Beam tool, the process of creating such structures is greatly simplified. 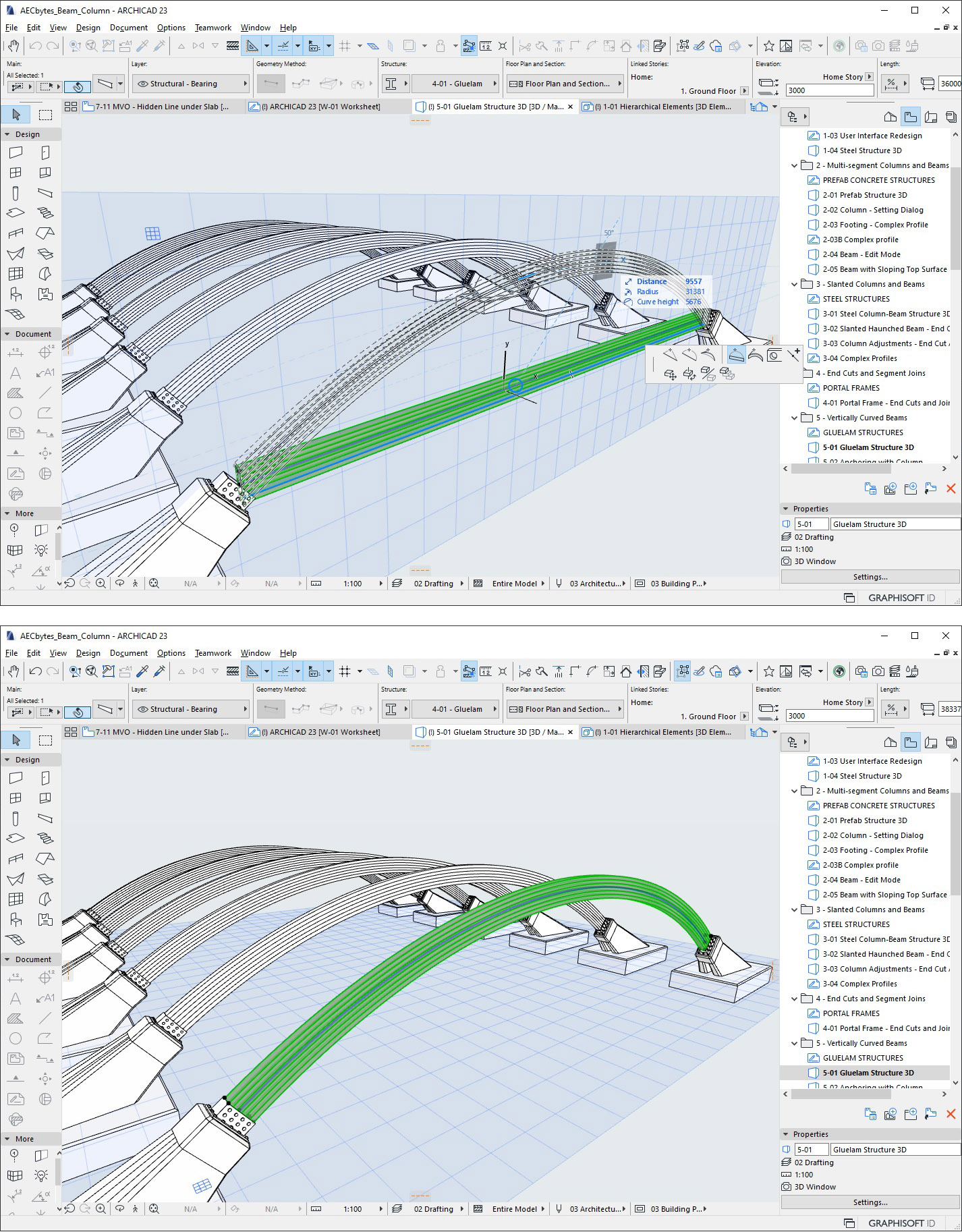 Figure 3. The ability to vertically curve beams is now built into the Beam tool. In this example, after the beam was curved, the end cuts were set to the angle required to make a smooth join with the column anchors on either side. 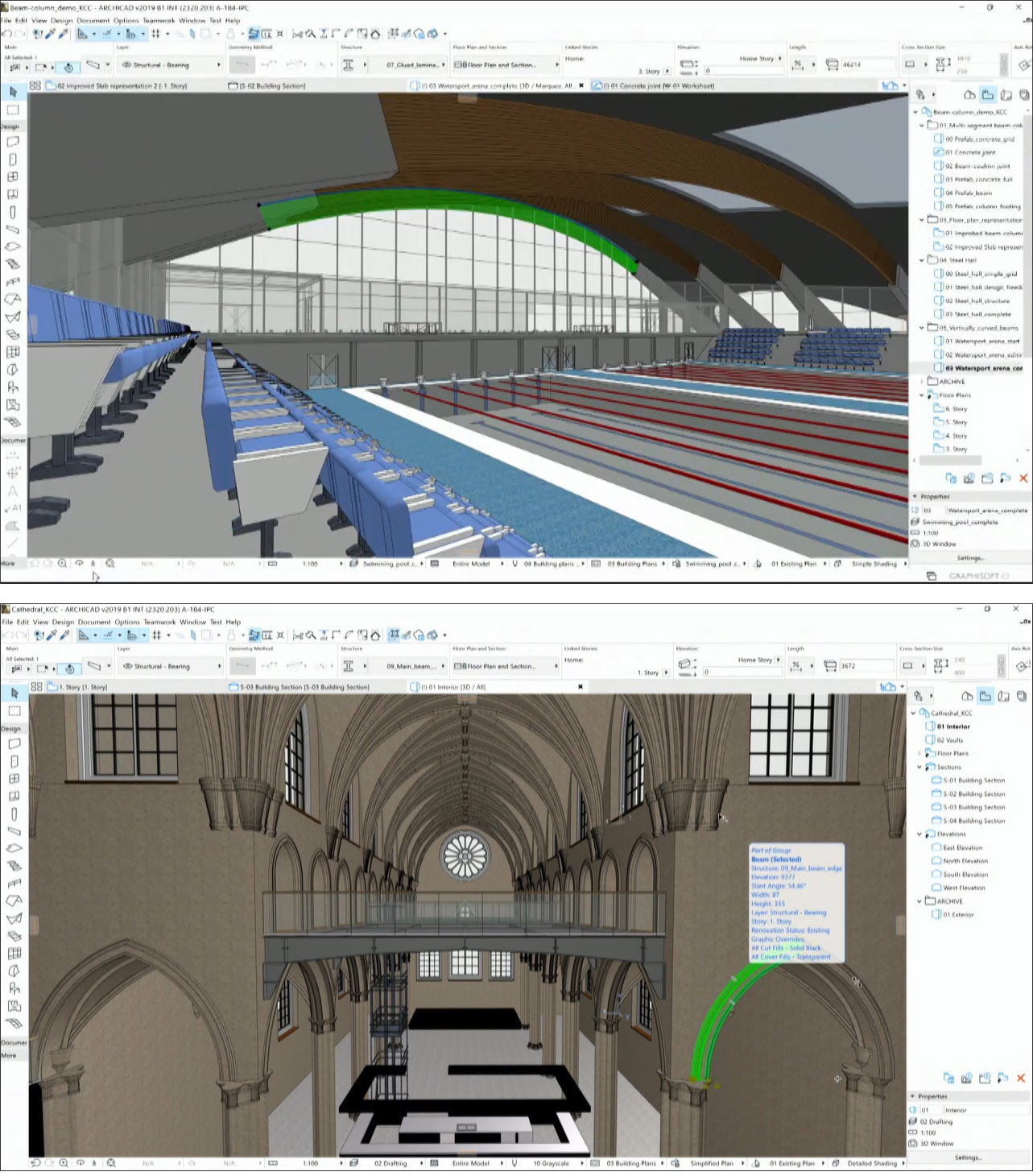 Another significant enhancement in ARCHICAD 23 is the introduction of a brand-new Opening tool that can be used to model a mechanical void as a specific element type rather than something that has just been “left over” after modeling physical elements such as wall, slabs, beams, etc. In fact, in previous versions of ARCHICAD, this is precisely how openings were created—through solid element operations that subtract one volume from another. Now openings can be modeled just like any other element with the Opening tool; in fact, any regular element can be used to create openings based on its geometry. Openings can be rectangular or circular, can have a custom extrusion angle, and can be positioned as required, as shown by the rather extreme example in Figure 5. They can be used to create a complete void with a full cut, or just a niche with a partial cut. They are retained after the operation and can be selected and re-positioned to make any changes to the cuts if necessary. 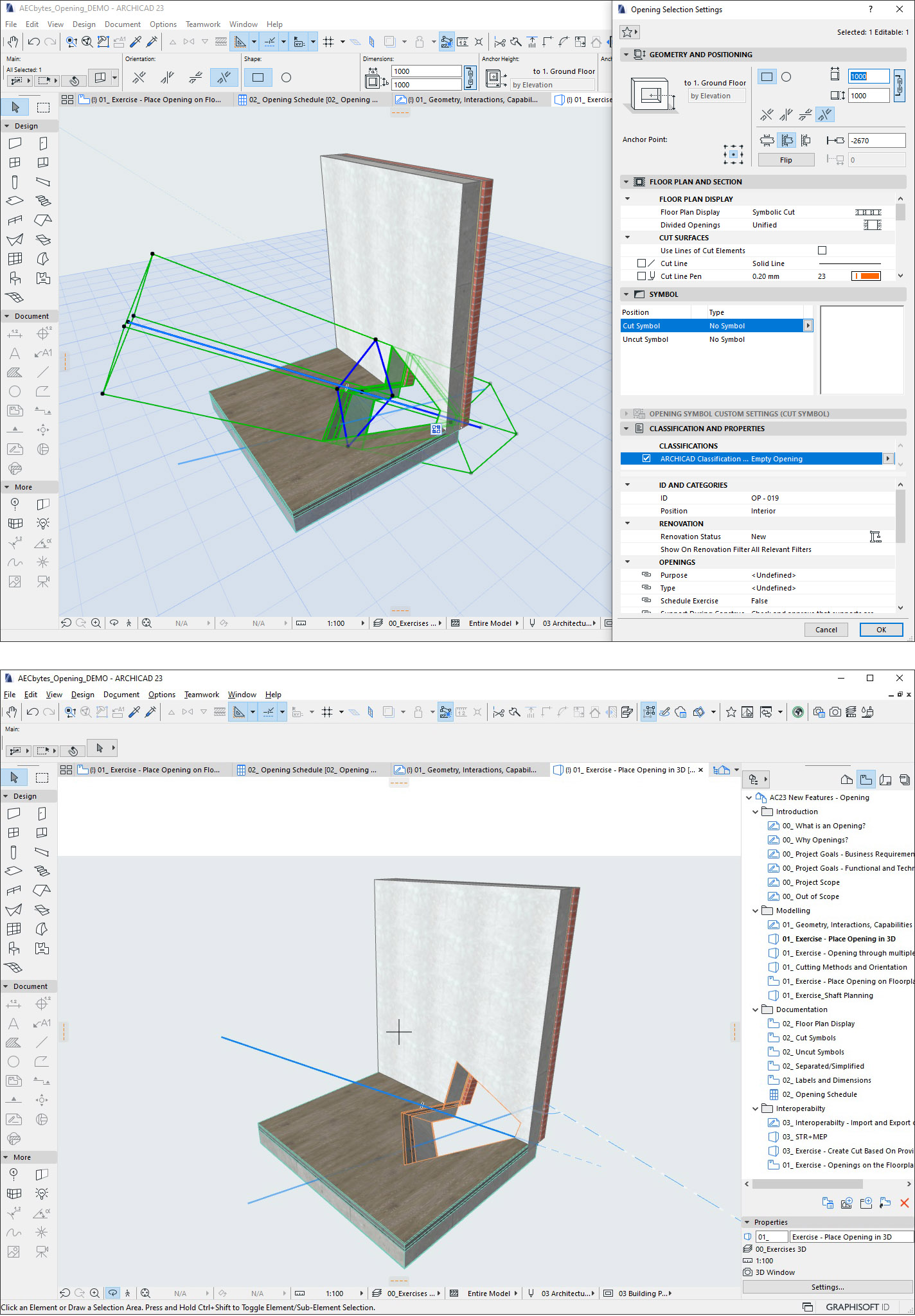 Figure 5. Creating an opening and positioning it to cut two adjoining physical elements. The result of the operation is also shown.

An opening can cut through multiple physical elements at once, as shown in Figure 6 where two physical elements were used to cut openings across multiple floors of a building. This would be very helpful for quickly modeling elevator or mechanical shafts, for example. 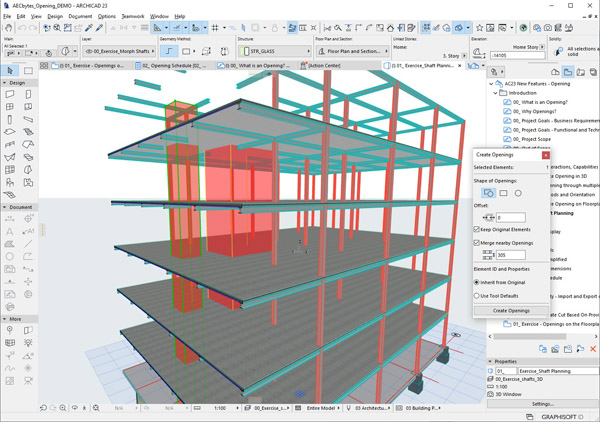 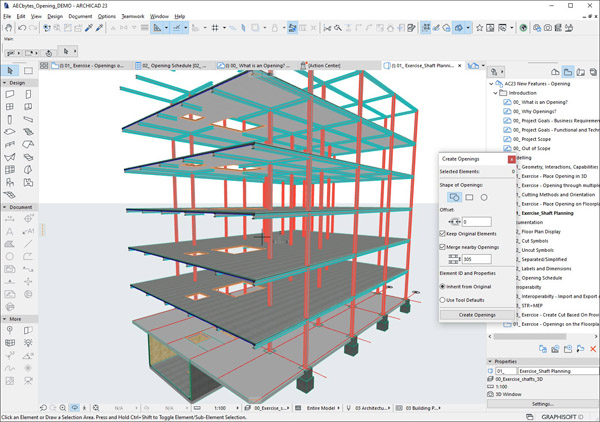 Figure 6. Using an element to cut through multiple floors of a building to create a shaft.

We can see how this capability can be used to improve coordination between architects and engineers. At more advanced design stages, you could import structural or MEP models in IFC format and use them to create the required voids in the architectural model in one step. There is even the ability to specify an offset for the openings in the Create Openings dialog shown in Figure 6, for example, 1¨ all around, which eliminates the tedious and painstaking task of creating each void manually with a tolerance based on the requirements of the engineer.

Opening can be labeled, dimensioned, and scheduled just like any other building element, and are automatically shown in 2D drawings with the correct symbols (Figure 7), which can be customized based on required standards. 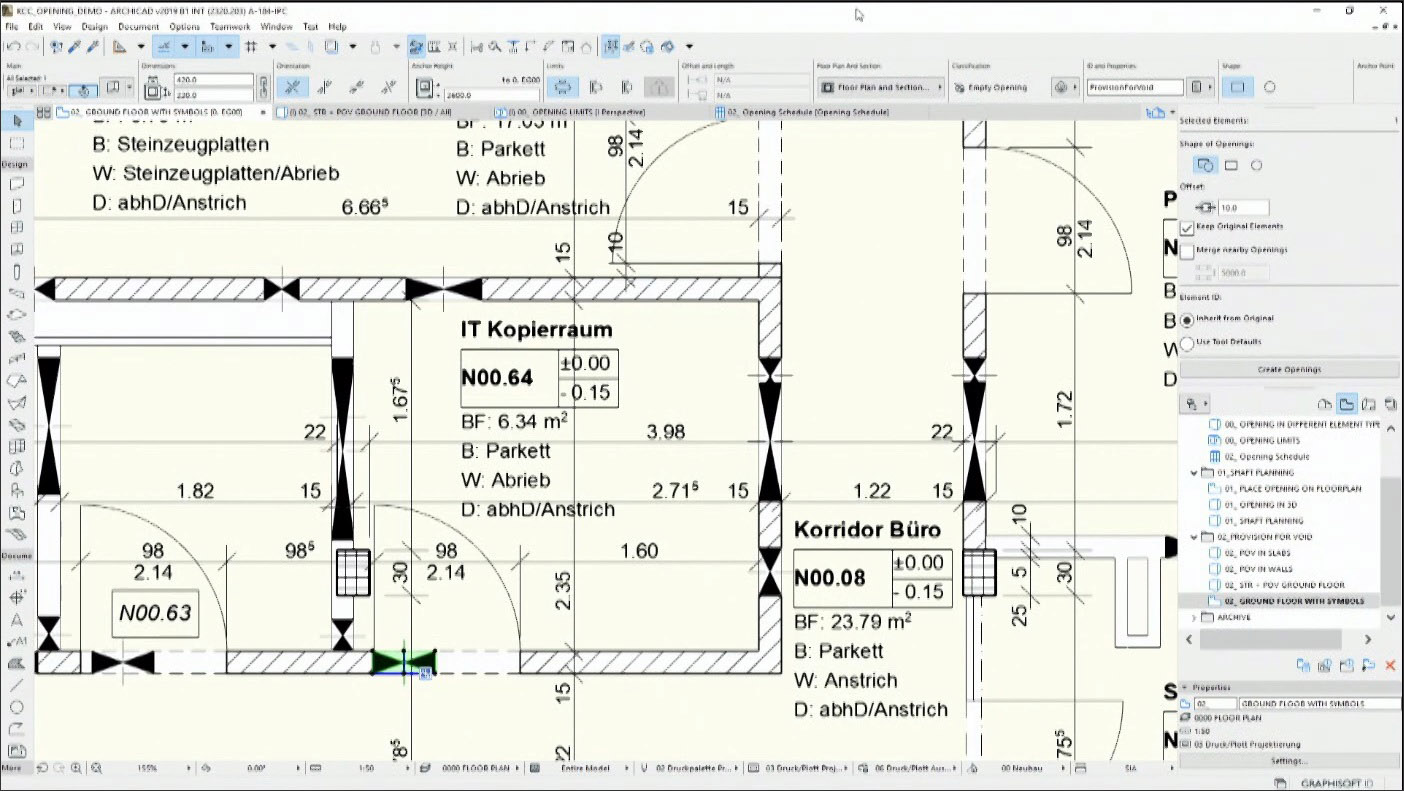 Figure 7. The display of openings with the correct symbols in a 2D view.

The other main enhancements in ARCHICAD 23 include improved performance, especially noticeable in operations such as file open, redraw, and refresh that are much faster; a new Startup dialog that shows slideshows of projects rather than just a single thumbnail image to help the user choose which project to open, as well as allows multiple projects to be open simultaneously; and a new Action Center that consolidates all issues and diagnostic data. There is the option to now see large-size previews of view tabs, which makes it easier to choose a view to activate when there are many tabs (Figure 8). There is also a Tab Overview to see all the previews side-by-side, which also makes it easier to select the right one. 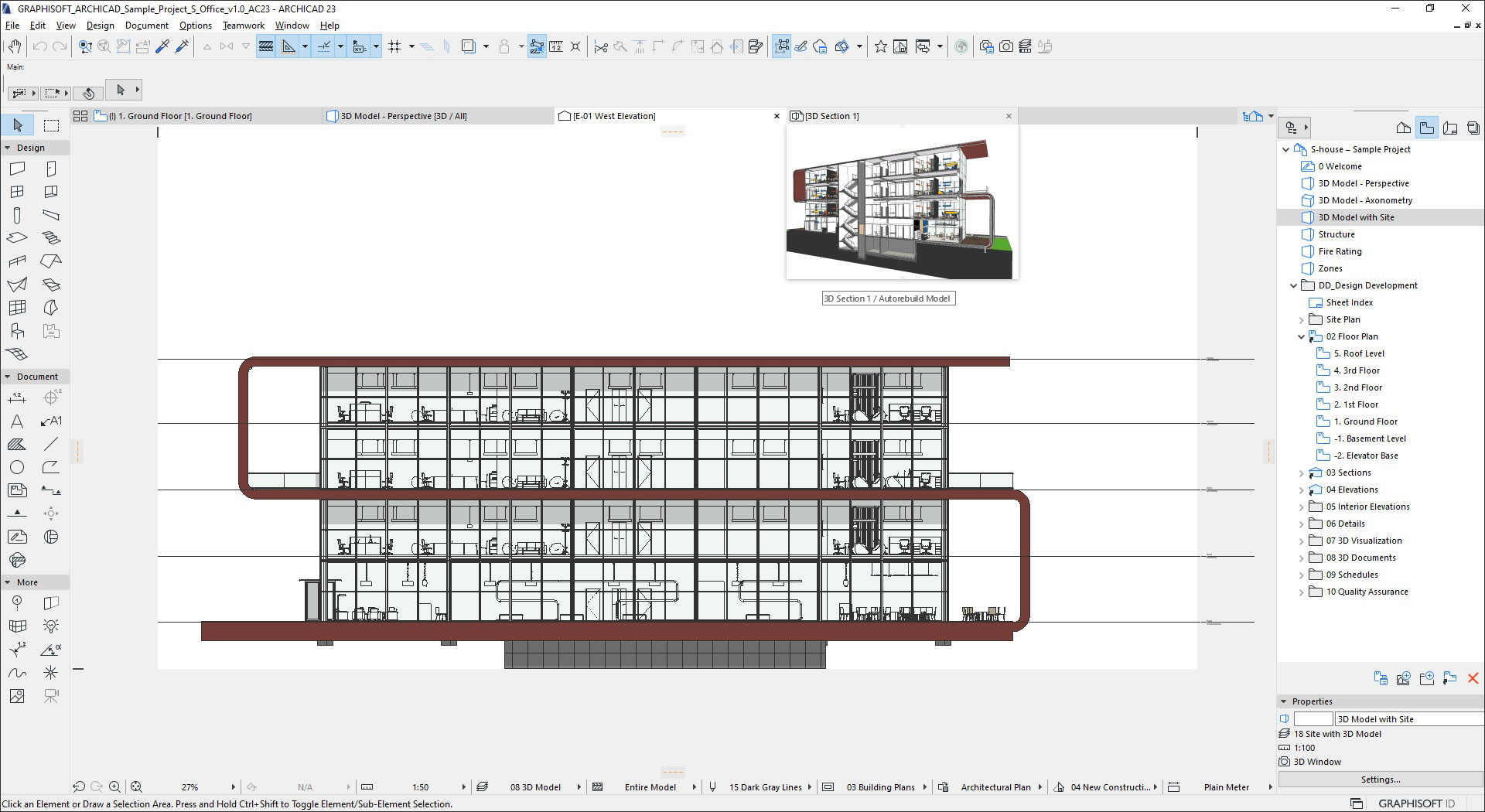 Figure 8. New tab previews make it faster to choose which tab to activate.

Other enhancements include the addition of a new louvre panel type for curtain walls to the ARCHICAD Library as well as several improvements in elevator objects and ramp objects that make them more versatile and easier to use.  On the interoperability front, ARCHICAD 23 is the first application to be certified for compliance with the new IFC4 format; it also has updated support for Bentley’s DGN format, including import of DGN v8 and export of DGN v7. Building materials can now have custom properties which can be useful in schedules as well as to capture metadata when exporting IFC. There are also several productivity enhancements including more text label pointer options in 2D document production and whether to show or hide the lines of connected slabs in plan view; an indication of surfaces with a missing texture in the Attribute Manager giving you the option of using another image for it or deleting it altogether (Figure 9); improved rendering of surface textures for better visualizations (Figure 10); improvements in the licensing and activation process to make it smoother; and several additional smaller enhancements. 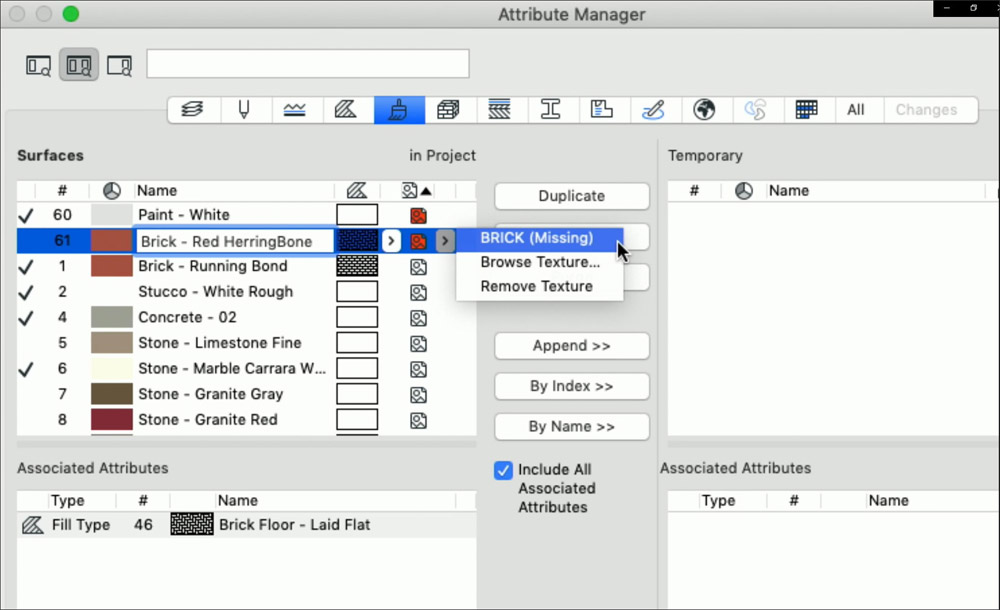 Figure 9. Indication of missing textures in the Attribute Manager. 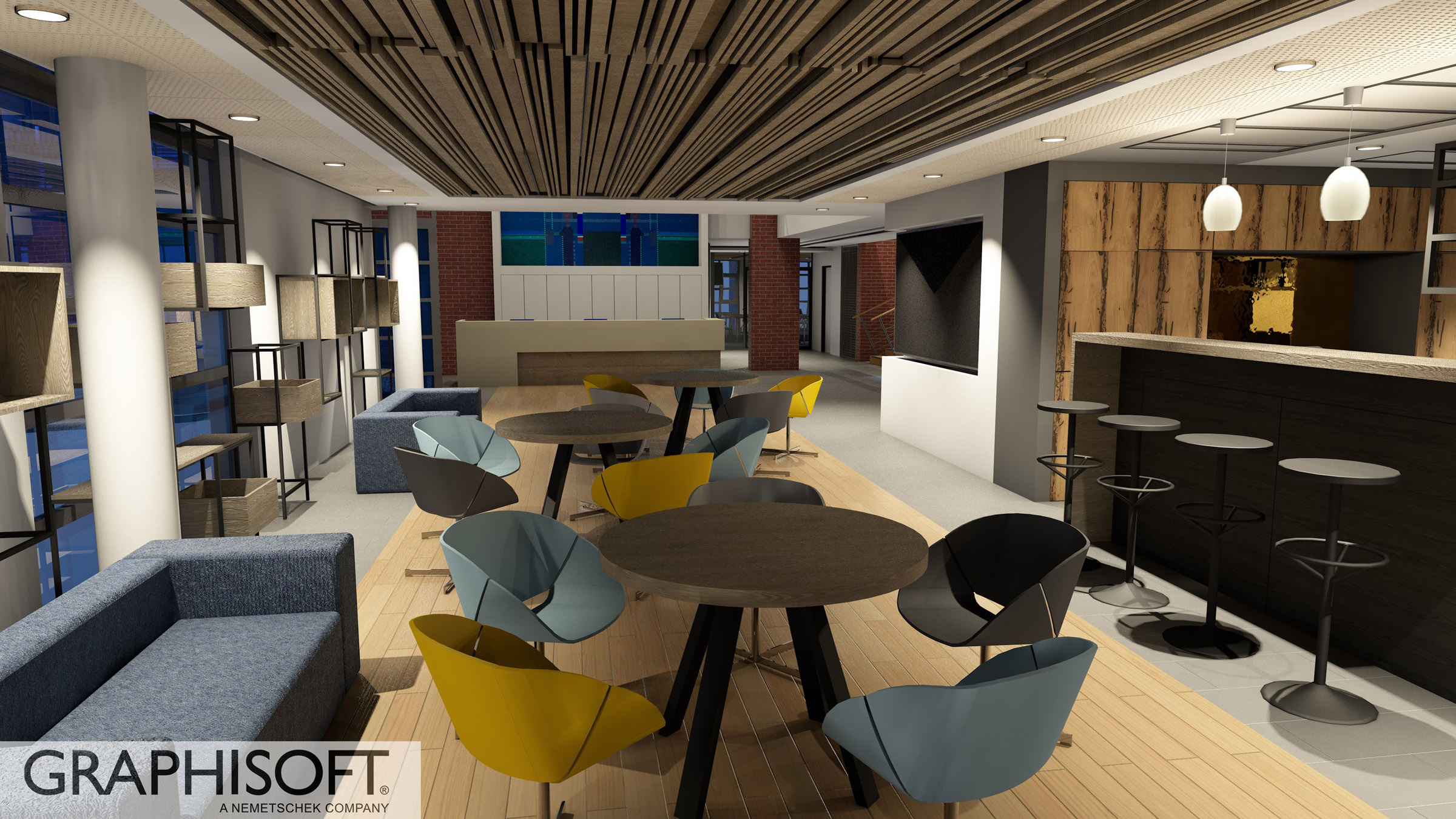 In a move that could significantly boost the adoption of ARCHICAD by making it easier for users to create custom workflows with it, GRAPHISOFT is working on expanding the APIs (Application Programming Interfaces) for it. Up until now, all third-party development for ARCHICAD has been done using its existing C++ API, which is extremely powerful and provides full access to ARCHICAD’s functionalities but is also very complex and requires programming expertise to work with. While there are some architectural firms who have managed to use it, they would typically have to hire software developers to do so. A good example of this is the integrated design and technology firm, AIDEA, headquartered in the Philippines, which put together a software development team in-house to work with ARCHICAD’s C++ APIs and automate many of its processes including visualization, quantity take-off, creation of 2D documentation and schedules, etc. An example of one of its add-ons that automates door schedules is shown in Figure 11. 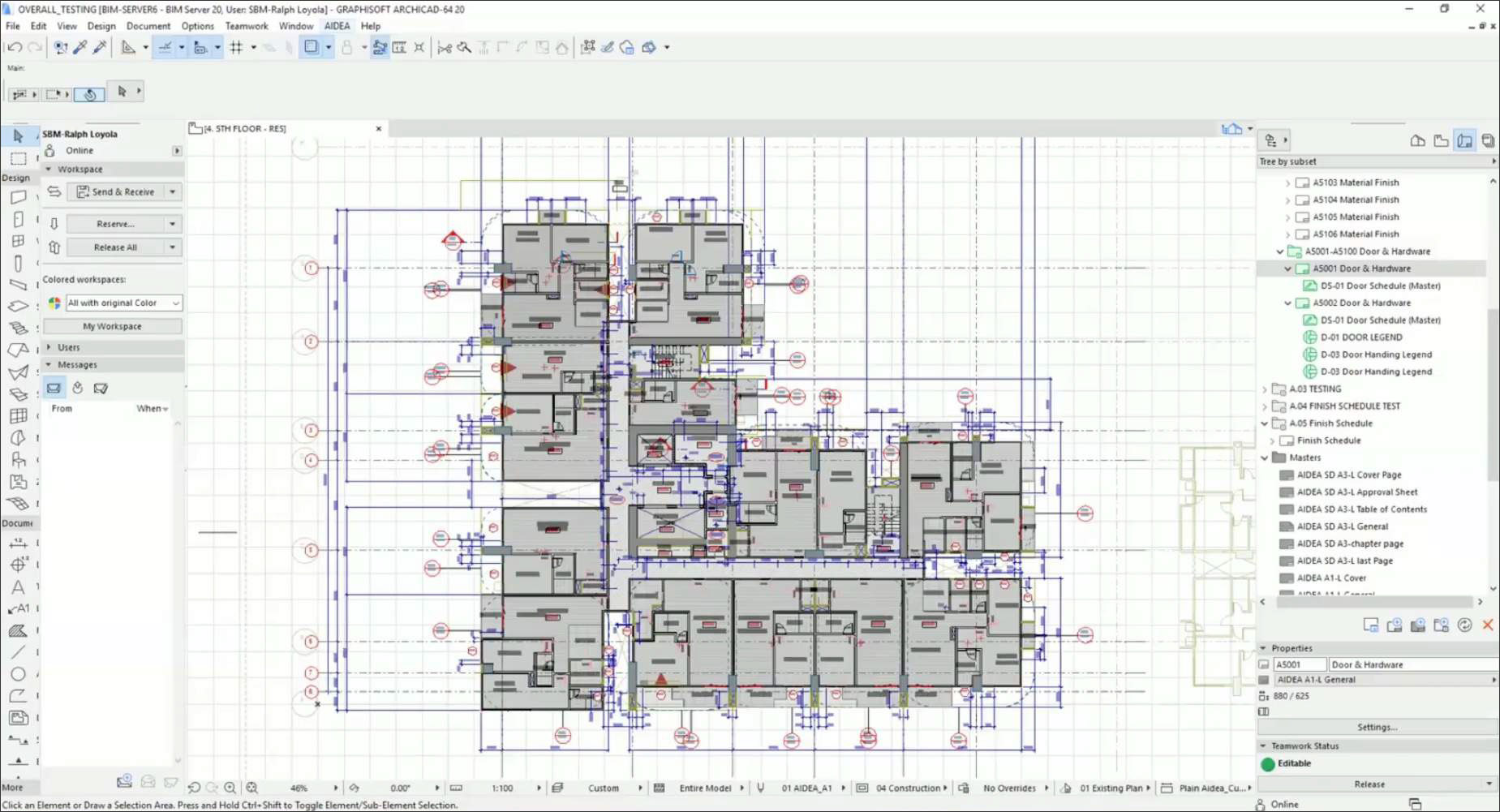 Figure 11. Example of an add-on that automates door schedules developed by the global design and technology firm, AIDEA.

To allow more ARCHICAD users to create custom add-ons and widgets with it, GRAPHISOFT has been developing more lightweight APIs for it in Python and JSON, which allow ARCHICAD to be automated with an easy-to-use scripting language. The Python API was developed as an experimental technology to demonstrate the power of a lightweight API, and Figure 12 shows an example of a Python script developed by GRAPHISOFT that connects ARCHICAD to Excel. The Python API will be soon be replaced with the JSON API, which will cover the functionalities of the Python API while connecting ARCHICAD to more applications. JSON, which stands for JavaScript Object Notation, is an open-standard data-interchange file format that is rapidly gaining popularity and supported by a growing number of applications. 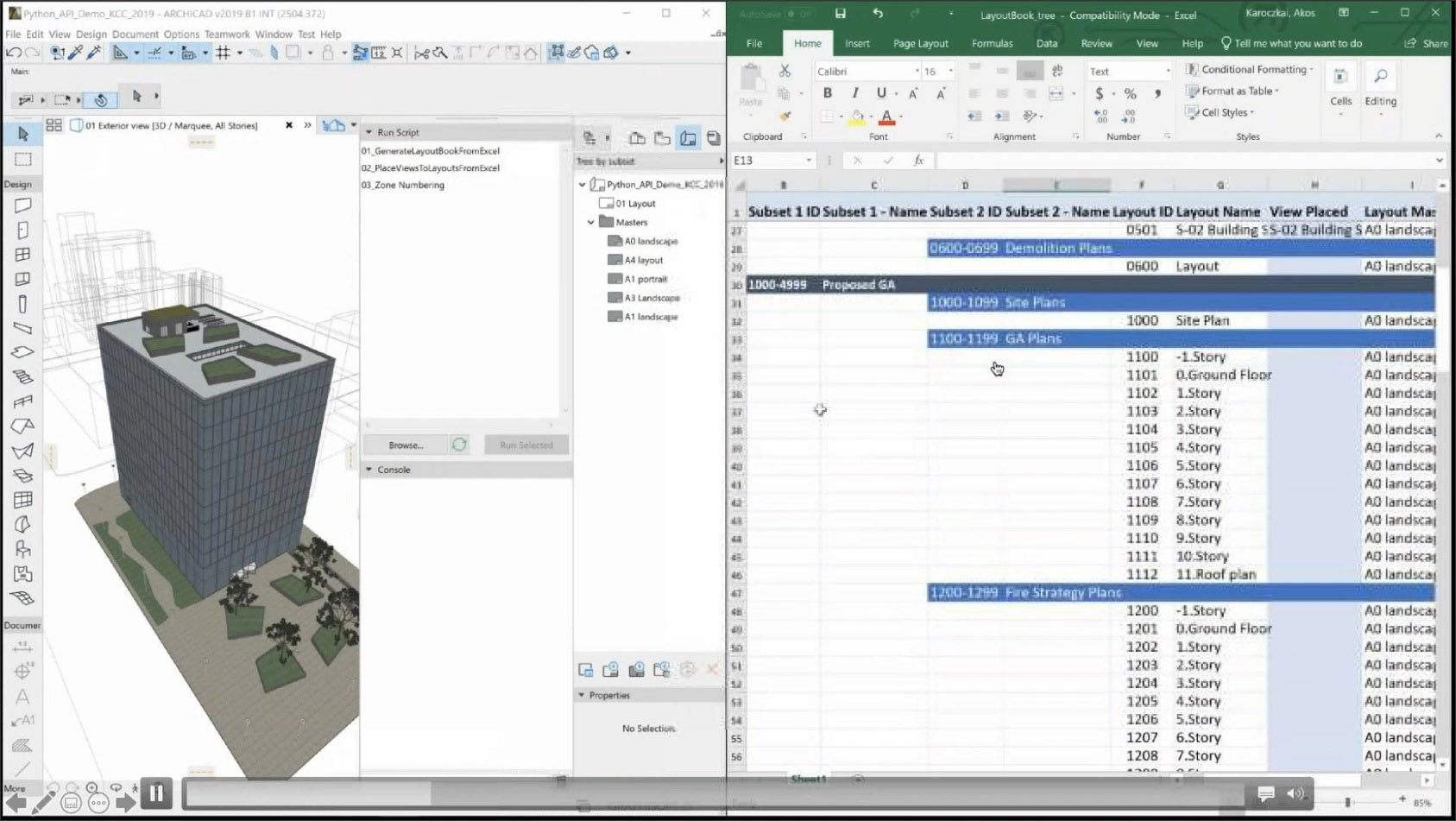 Figure 12. Example of a Python script that connects ARCHICAD to Excel.

In addition to integrations with a wider range of third-party applications, the new APIs will also make it easier for clients to create custom ARCHICAD workflows specific to their offices and projects. We saw an early example of this at the KCC event, where the Swedish firm Liljewall Arkitekter showed some widgets they had developed that use Python and JavaScript to connect with ARCHICAD via its Grasshopper integration, which itself is based on JSON technology. 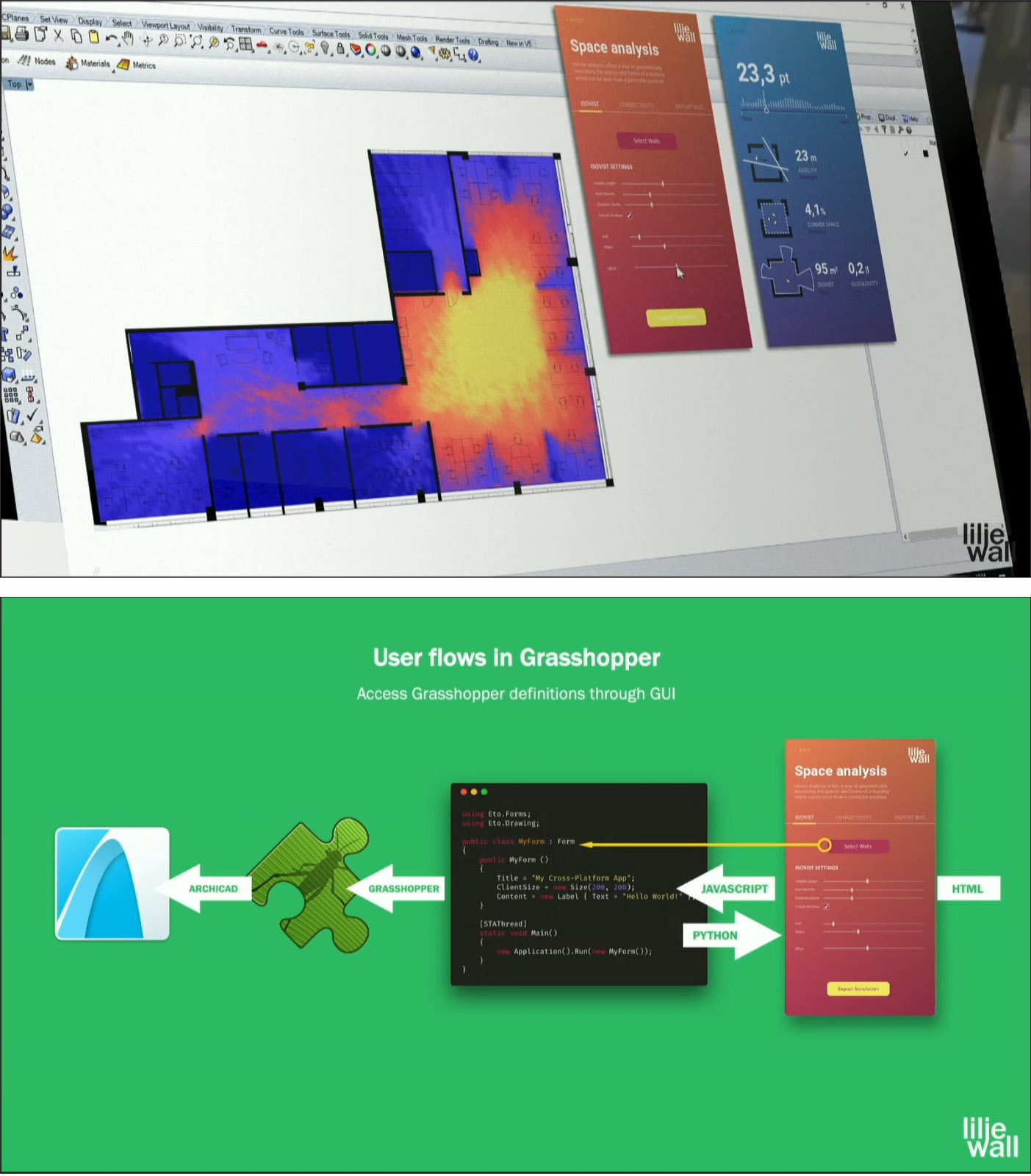 With each new release, ARCHICAD continues to improve its modeling and design capabilities, and the main improvements in this release—being able to model structurally correct beams and columns by segmenting them, as well as being able to automate the creation of voids to accommodate MEP and structural elements—significantly enhance its ability to create architectural models that work well with other disciplinary models. I was especially impressed with how robust, expansive, and well-thought-out the new features were—showing evidence of a concerted effort by the development team to think through a new feature and explore all possible uses and ramifications of it.

As a technologist, I am most excited about the upcoming APIs and their potential for not only automating several tedious modeling tasks and streamlining processes by connecting ARCHICAD with other applications, but also for creating higher-level analysis and evaluation tools that can actually improve the quality of a proposed design.