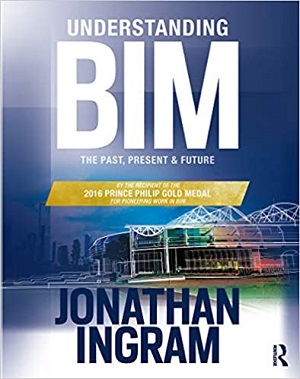 Given the large number of books on BIM that have been — and continue to be — published, what makes Understanding BIM stand out is that it is authored by someone who actually developed the precursor to modern BIM applications. This was an application called SONATA and it was developed by Jonathan Ingram — in true Silicon Valley start-up style — in his attic (rather than a garage as it would be in Silicon Valley!) in England. SONATA became REfLEX, which then became ProReflex, which was acquired by PTC (Parametric Technology Corporation), from which Revit emerged as a start-up, which was then acquired by Autodesk — and then of course, as they say, the rest is history. It is fascinating to be able to look back at the origins of BIM from someone who not only had a front row seat to the game, but who actually played it — and not just played it, but actually drafted many of its rules. (For any innovation, technological or otherwise, there is rarely a single “inventor” but rather, a lot of academic research and early prototypes that contribute to its genesis, and this is true of BIM as well.)

For anyone, therefore, who is interested in the history of BIM in detail, Understanding BIM isan excellent resource. However, as the full title of the book suggests (Understanding BIM: The Past, Present and Future), it is not just a history lesson. Ingram also looks at what exactly BIM is (a recap is always helpful), the current status of BIM, the available BIM applications, the potential benefits of BIM implementation to design and construction firms, how BIM enables all the different processes in AEC, the emergence of new business models like Design-Build and IPD (integrated project delivery) that can be enhanced with BIM, the different BIM standards that currently exist, and the level of implementation in different countries. We especially learn more about the current state of the art of BIM in Australia – where Ingram is originally from and where he started his career — and in the UK — where he continued his work and where he is currently based. It was especially informative to learn more about the BIM mandates in the UK and its different Levels of BIM Implementation that are explicitly defined. This is also especially interesting given that many of the earliest BIM-related developments originated in the UK such as BDS, ARK-2, CEDAR, and RUCAPS.

One area related to BIM that Ingram has been working on, and which is described in the book in some detail, is RIM, which stands for Retail Information Modeling. It is the application of the principles of BIM to the Retail industry. A retail system consists of a fixed asset (the building) and movable inventory, which has to be tracked and managed. Adopting a model-based approach for this makes it a lot more efficient. While RIM may not seem directly relevant to BIM which primarily has immovable assets like buildings and infrastructure, it is certainly relevant once these assets are in operation and are inhabited by people and equipment, which can be regarded as movable assets similar to the inventory in a retail store. As an industry, we haven’t made that much progress yet in BIM for FM — and while Understanding BIM does not shed more light on why this is so — perhaps we can look to RIM for some help.

In addition to looking at RIM for ideas on how to apply BIM more effectively in AEC going forward, Ingram also looks at how the concept and principles of BIM can be applied at a larger scaler — to entire cities — under the moniker “City Information Modeling (CIM).” While the concept of CIM is not new (see the article, City Information Modeling, in AECbytes published in 2016), and the many benefits a CIM would have in the planning and management of a city are also widely agreed upon, what is novel are some of Ingram’s ideas about how CIM should work. He envisions CIM as a virtual environment similar to Second Life (remember that?), except that the virtual world is not imaginary, as it was in Second Life, but is an exact replica of the physical world. So far, the vision is identical to how CIM is conceptualized. But where Ingram’s ideas diverge from the common understanding of CIM is that he envisages the CIM model as being populated by avatars representing actual people, who would interact with the virtual world the way we all do do with the physical world. The location of the avatars in the digital city would be determined by the GPS capabilities of our phones in the real world. The technology underpinning this virtual CIM would be a gaming engine; and given the enormous strides this technology is making every day, Ingram’s vision of CIM seems to be doable, at least from a technology perspective. It would be interesting to explore this further and perhaps determine if it can be tied to other cutting-edge technologies in AEC such as pedestrian simulation (see the article, LEGION and the Technology of Pedestrian Simulation).

One of the most frequently asked questions about building design and construction is why it cannot be more like manufacturing and thereby benefit from its many efficiencies. While it is accepted that buildings (and infrastructure) are typically one-off entities that cannot be mass-produced, the AEC industry see prefabrication as the answer to the manufacturing question, and BIM, in particular, with its object-based approach, is well suited to support prefabrication technology. Any discussion of BIM, therefore, would typically explore its ability in this regard, and in Understanding BIM, Ingram looks at how BIM can be used for digital fabrication and modular construction, while at the same time bringing the values of lean production and waste reduction to construction. This is one aspect of BIM, however, where industry practices will drive the change rather than what is technologically possible — we don’t need much more from BIM in its current form to support offsite construction and assembly.

Looking even further ahead in the future, Ingram explores how BIM can work with technologies such as AR and VR (augmented reality and virtual reality), NLP (Natural Language Processing), AI and ML (Artificial Intelligence and Machine Learning), and Generative Design to have even more dramatic impacts on the cost, quality, and sustainability of our physical infrastructure. One of his ideas about the future development of BIM was especially intriguing, which is to have building components not built into the BIM model as they currently are, but instead, be defined via plugins to the model. This would make the BIM model more of a database than a “model” per se, and if all the data representing the components is linked to it rather than defined within it, the BIM model itself will be extremely streamlined and lightweight. It can be hosted on the cloud and easily shared between disciplines, each of whom can view only those objects that are relevant to their work by activating their plugins. Of course, this would be end of BIM as we know it, but the idea of the entire model being a database populated on-demand by objects via plugins seems very interesting and definitely worth exploring.

Overall, I found Understanding BIM an excellent resource on the history of BIM, its current status, and its future potential, with some very intriguing ideas for its further development. I don’t think Ingram has set out to write the definitive book on BIM like the “BIM Handbook” (see its review in AECbytes). Rather, he has captured his extensive experience as one of the pioneering developers of BIM, which makes his analysis of current trends and the possible future of BIM very compelling. Every technical book has a different flavor based on the background and expertise of the author, and we are fortunate to have Ingram’s captured in Understanding BIM.