This article aims to highlight the practical benefits of using BIM software for fire protection design through a real-world case study involving the storage capacity expansion of a bottling plant of Coca-Cola HBC S/E Europe in Timis, Romania.

The firefighting network has been designed and calculated with FineFIRE, a BIM vertical belonging to the FineMEP Suite. FineFIRE combines an AutoCAD-like functionality with a familiar BIM approach that helps its user locate the sprinklers and draw the piping network quickly and intelligently. The smart modeling component works with the calculation engine of FineFIRE to simulate the fire installation precisely in order to provide the pipe sizing details and pump specifications at construction detail level.

Building Information Modeling (BIM) is an intelligent 3D model-based process using semantic information to simulate the building model behavior in order to assist the designer to reach the optimum alternatives. When it comes to Fire Protection systems, a BIM software tool considers all the parameters of the physical and functional characteristics of a sprinkler network to support a series of tasks, such as smart network modeling, the identification of clashes with the other MEP installations, quick exploration of alternative viable options, extraction of the bill of materials, and many others. All these functionalities, in conjunction with the easy collaboration and sharing of information between the designer and the constructor, provide the designer with more time to focus on the higher-level aspects of the design and therefore to aim at the best alternative.

Even though the above principles and concepts are more or less present in other BIM software products as well, we are referring to FineFIRE below since it was the specific BIM tool selected for the respective case study. There are some important reasons why FineFIRE was selected by the designers: 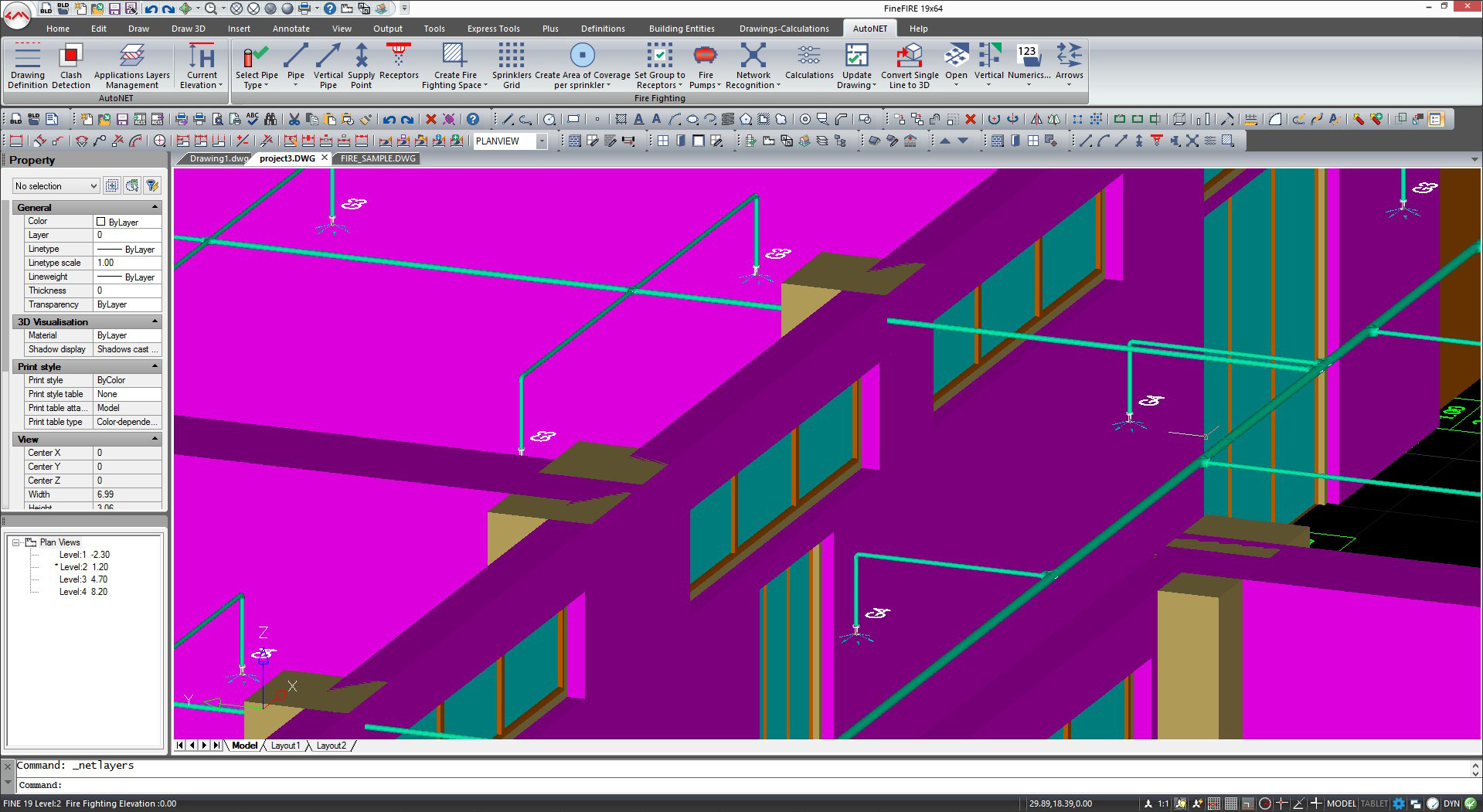 Figure 1. The interface of FineFIRE.

The relevant storage use determines the hazard classification according to the NFPA 13 standard. In this case study, ordinary hazard sprinklers (OH) were placed, while the storage space was divided accordingly into areas to place ceiling or sidewall sprinkler grids automatically. FineFIRE saves considerable time by proposing the optimal number of sprinklers in the grid of each area. By applying the command “array of sprinklers,” the program correctly places the sprinkler heads, keeping the proper distances among the sprinklers themselves and the wall boundaries. Such an automated network modeling process achieves great time savings, a factor which is quite critical for medium and large-scale projects such as in our project where 1.700 sprinklers had to be placed (Figure 2).

Figure 2. The sprinkler placement in plan view in FineFIRE.

In addition to the sprinkler location, the resultant piping design is also simplified through the FineFIRE routing commands, which support the placement of any type of network (branches, sub-branches, grids, and loops) regarding the main pipes, as well as the network pipe connections between the sprinklers and main pipes, which are performed automatically for each group of sprinklers as defined by the user (Figure 3). 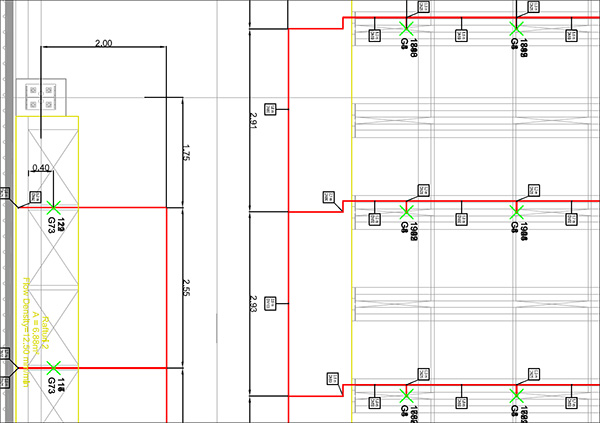 Figure 3. A detailed view of the design showing the sprinklers, pipes, and connections.

In this specific case study, sprinklers were grouped in 88 groups, each one of which was assigned to cover a specific area. What is important at this stage is the network recognition process by FineFIRE, which checks the validity of the network by indicating possible mistakes and how they should be corrected. Thanks to this algorithm, the continuity and rationality of the network — which comprised over 3.600 nodes for this case study — is ensured before the hydraulic calculations take place.

Figure 4. A vertical view of the network design.

With the use of FineFIRE, the numbering of the network nodes, network section lengths, sprinkler heads and piping fittings are all transferred properly to the calculation sheet for further analysis.

Calculation results, as provided by the FineFIRE calculation engine, specify the detailed dimensioning of the project network where each pipe is sized in compliance with the standards. Node numbers and segments are numbered and named automatically to provide visibility and easy control in the calculation sheet for every pipe segment and sprinkler (Figure 5).

Parameters like maximum area of operation per sprinkler (m2), design density (mm/min), friction losses (bar), flow (liters per minute) and others according to the NFPA 13 Standard are all indicated within the calculation sheet. The user has access to the independent variables, and the entire calculation sheet is automatically updated after each modification. Above all, the designer is able to have full supervision on both drawings and calculations at the same time (Figure 6). 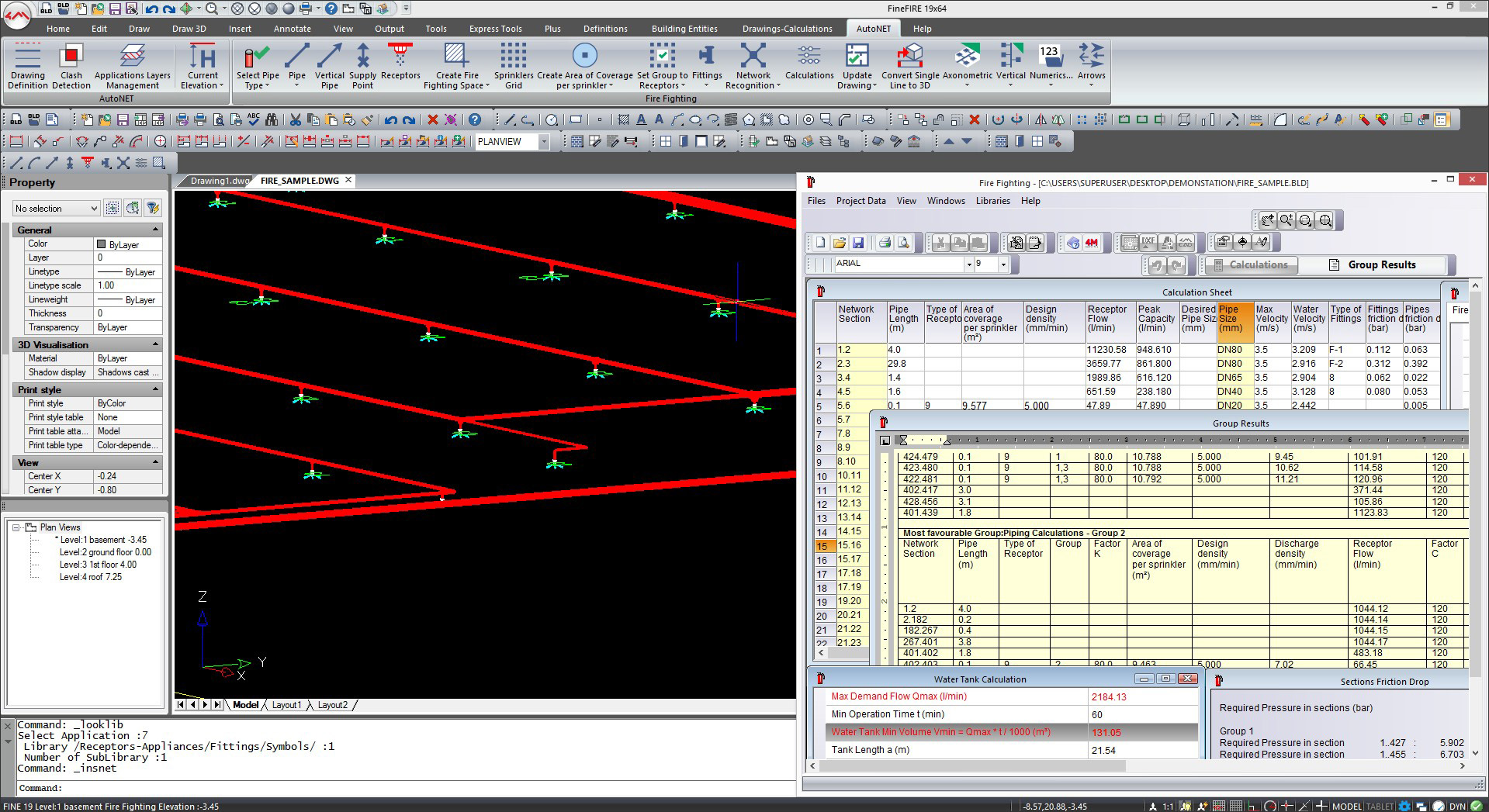 Figure 6. The fire designer has a simultaneous view of both the drawings and the calculations in FineFIRE.

When it comes to the selection of the other equipment, the most favorable and unfavorable sprinkler groups are detected automatically in order to support the selection of the appropriate fire pump set and water tank (Figure 7).  In this way, the pump is capable of providing the necessary flow and pressure for the most favorable and unfavorable areas, as requested by the NFPA (and also the EN) Standards. 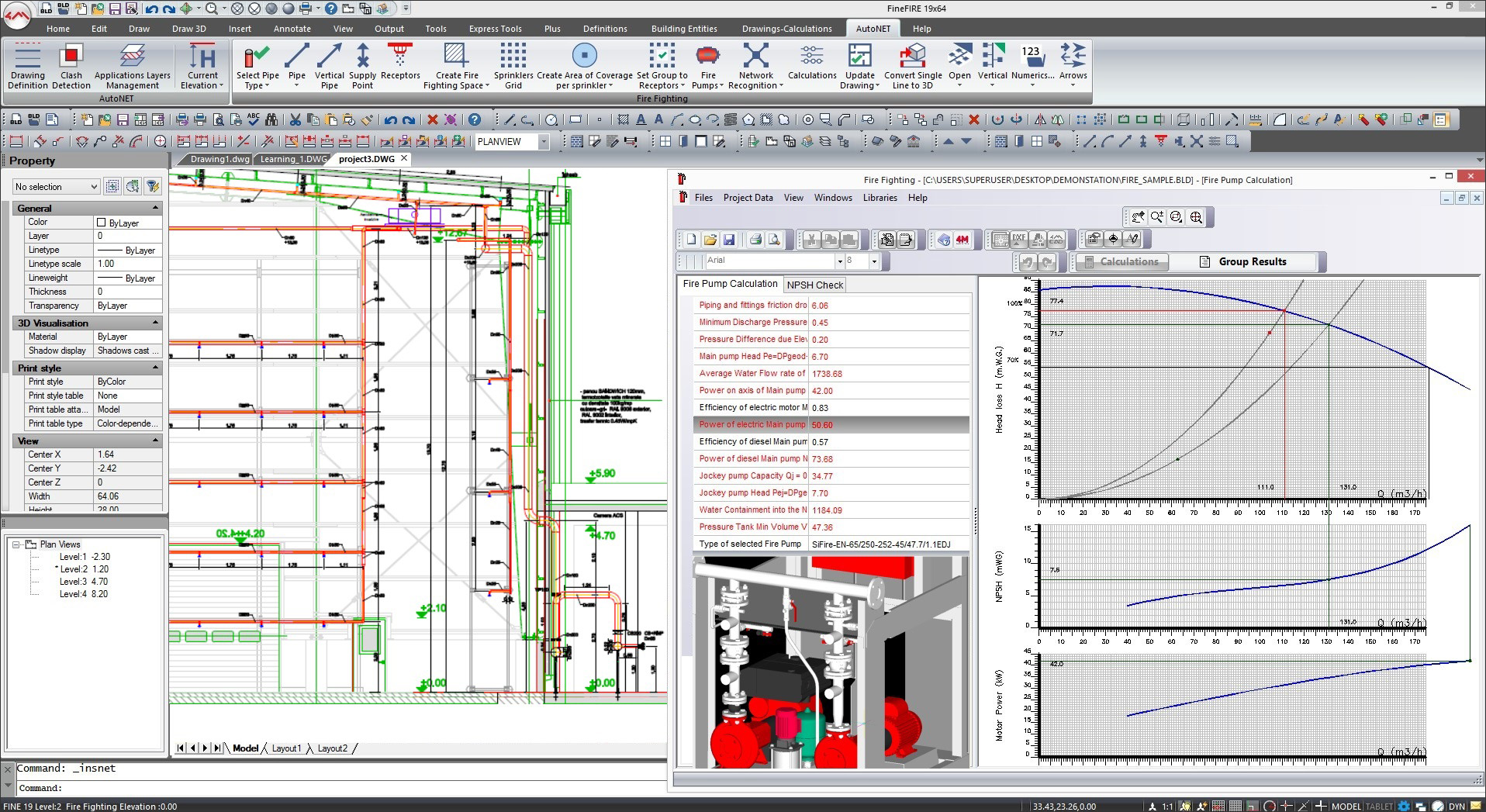 Thanks to the detailed hydraulic calculations which also take into account the characteristic curves of the pumps, the selection of the required equipment is made in the most precise way.

Calculation reports include all the step-by-step and final results in full accordance with the Standard selected. The output also includes a set of 2D & 3D drawings that are automatically generated and updated following the calculation results. A symbolic diagram of the pumps layout is also available (Figure 8) 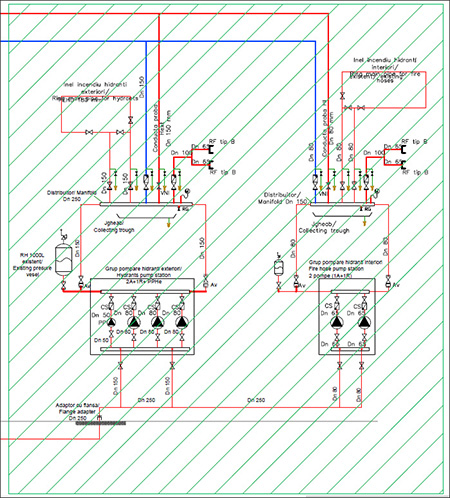 Figure 8. Symbolic diagrams of the pumps.

And finally, the total cost/budget of the installation is also available through a detailed list of the Bill of Materials (fittings, pipes, sprinklers, fire pumps and other elements) for the project.

FineFIRE provides a holistic BIM approach for the design of any kind of sprinkler installation (tree, looped, gridded or any combination) through a sophisticated simulation environment which accurately specifies the fire network installation in compliance with the latest standards. Despite its high parameterization, FineFIRE remains user-friendly, provides the designer with the ability to manage the BIM information at every stage of the design process, and allows collaboration between different users with respect to other CAD and BIM software applications. Most importantly, FineFIRE supports the designer in achieving optimum design solutions by solving possible problems in the virtual world before they happen in the real world. 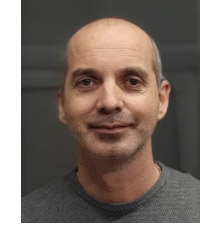 Eng. Sorin T. FICUT, owner and CEO of INTBS Romania, a group formed by the companies IntelliTECH SRL and Intelli Instal TM SRL, is a Civil installations engineer, with studies at the “Universitatea Politehnica din Timisoara” specialized in the field of fire safety systems & ATEX environments. INTBS Romania is active mainly in Eastern Europe working on projects such as the reintroduction in the technological flow of some industrial facilities from the old communist bloc, large-scale buildings, which must be brought to the current security standards; and evaluations, redesigns and safety scenarios using the latest software technologies for a unitary coordination of fire safety systems and installations related to buildings resulting from successive and fragmented extensions of production facilities, storage and offices. He can be reached at sorin.ficut@intbs.ro. 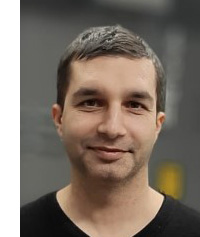 Eng. Dan FERNE, Technical Director of INTBS Romania, is the main design engineer of all its projects. In addition to being a graduated engineer from Timisoara Polytechnic University, he also has many other specializations in fire safety systems. For 20 years, he has been working as a design engineer for many industrial and commercial buildings.  He can be reached at dan.ferne@intbs.ro. 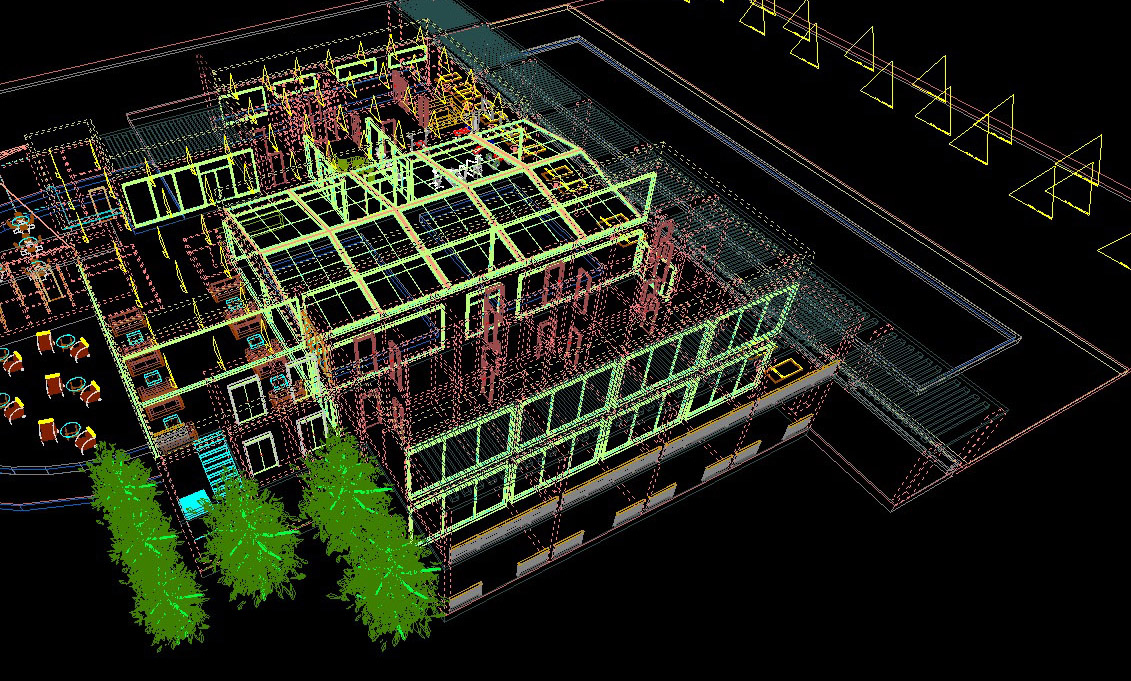 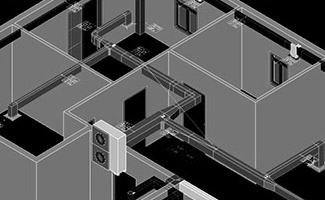 This review explores FINE MEP, a complete set of BIM applications for MEP design that are cost-effective, have a familiar AutoCAD-like interface, support multiple MEP norms and standards, automate calculations, produce the required drawings and reports, and allow BIM models to be imported in IFC format. 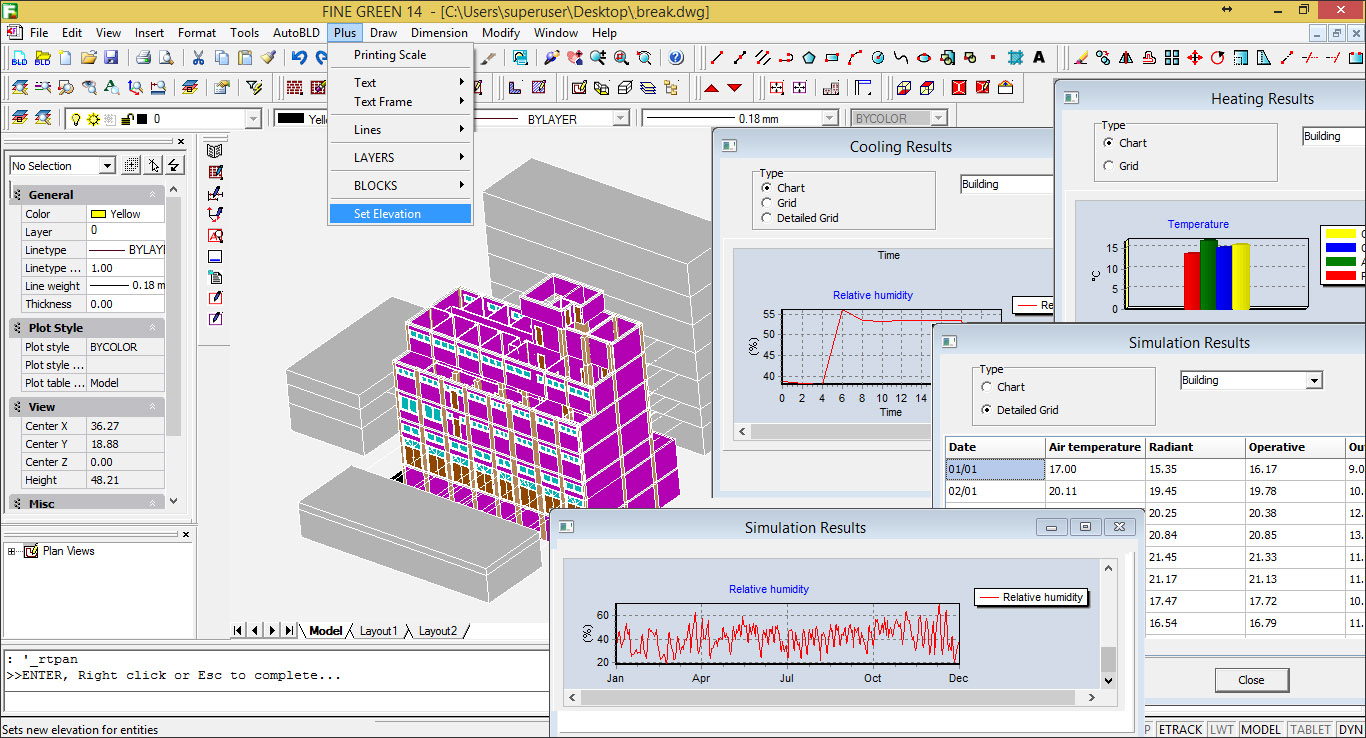 In this article, Vasilios Giotis, Director of Blue Green Engineering (BGe), an Australian company with long and extensive experience in Building Energy Design, demonstrates the use of 4M FineGREEN simulation software for the energy modeling of a specific case study. 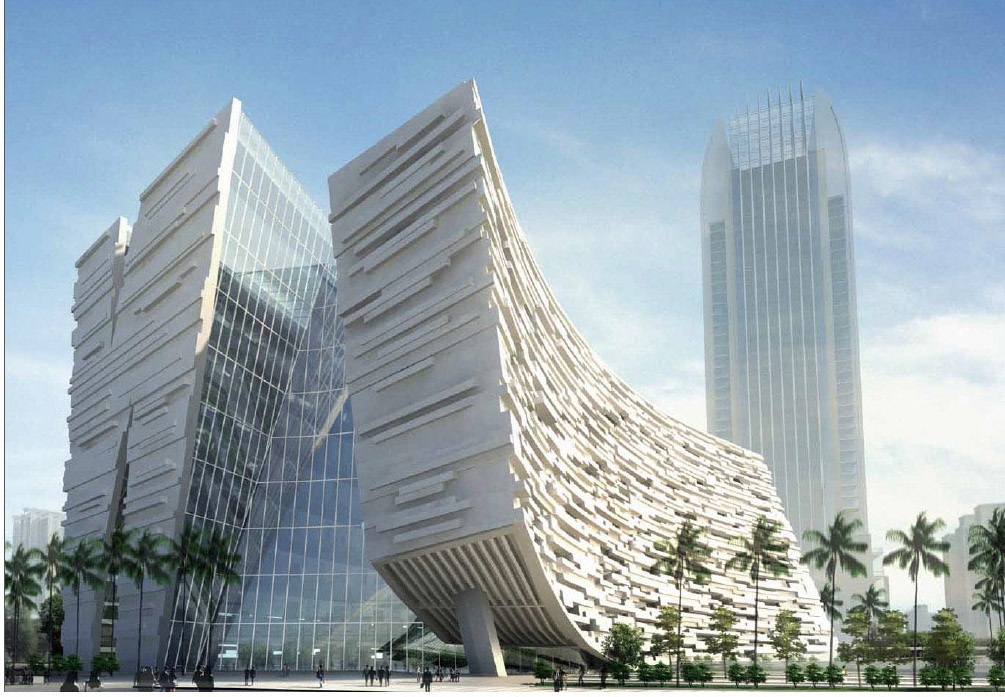 This article starts 2020 by looking back at the last two decades and summarizes which applications have stood the test of time and which did not make it. It is based on my own experience of being in the AEC technology industry for over 15 years.