Codemill is a software development company located in Kajaani, Finland. They specialize in developing software products and services for AEC industry. With Navistools being their flagship product, they offer solutions to visualize, manage, and exchange project life cycle data in Navisworks BIM models and with external databases.

Navistools Clash Manager is an extension (plugin) for Navisworks that was developed by Codemill in late 2019. It provides additional functionality to the Navisworks Clash Detective tool.  Clash Manager introduces several novel features to assist the user to manage clashes. One feature includes using clash markers for grouping clashes. Clash markers are spherical elements automatically placed in the model graphical space to identify clashes detected. These clash markers allow users to select clashes directly from the graphical view.  Another unique feature of Clash Manager is an advanced grouping option. Users can group clashes automatically based on multiple criteria.  The clash reports feature facilitates coordination and resolution of clashes. Multiple view of a clash and the clash data provided in the report help users to identify its location and better understand the clash.

This article provides an overview of Navistools Clash Manager and explains its features and functionalities in detail. It also provides suggestions for the future improvement of the tool.

Using the tools provided by the Navistools Clash Manager (Figure 1), users can assign clashes to the responsible person, provide clashes with comments, change default viewpoints for the clashes, and change status of a clash. 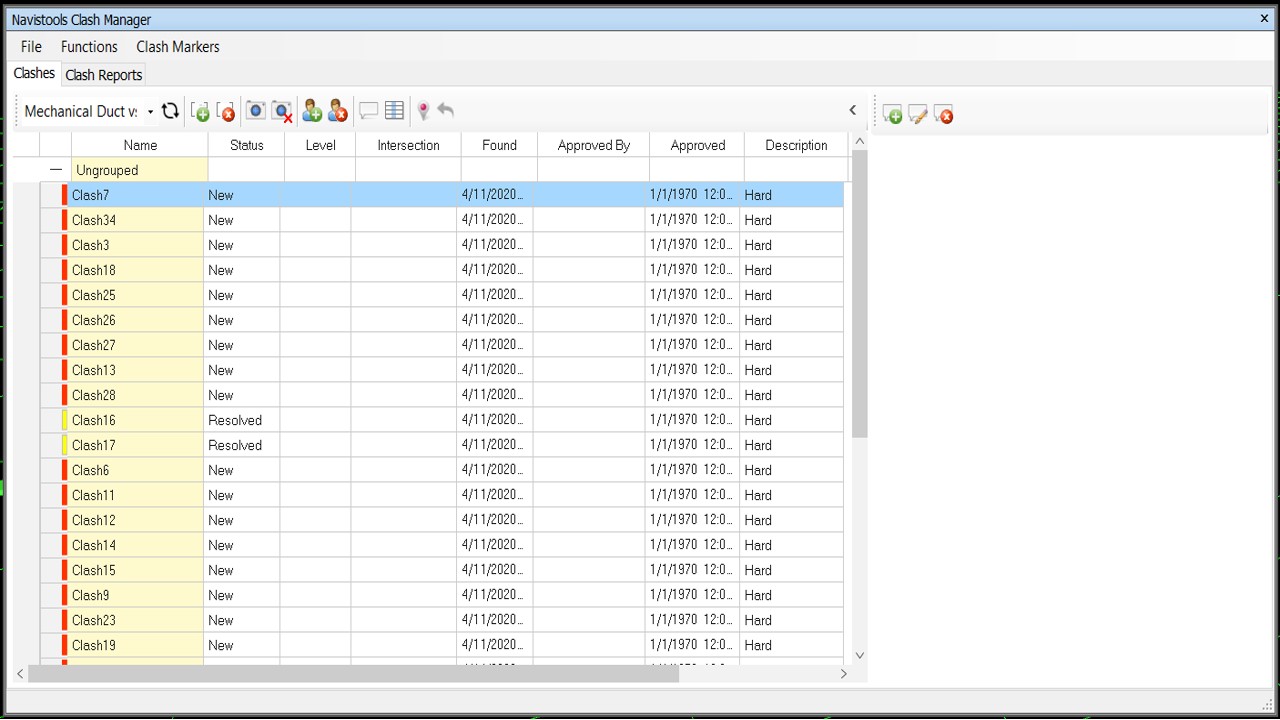 User can change the highlight color of the clashing elements and clash markers through the “File” menu (Figure 2). 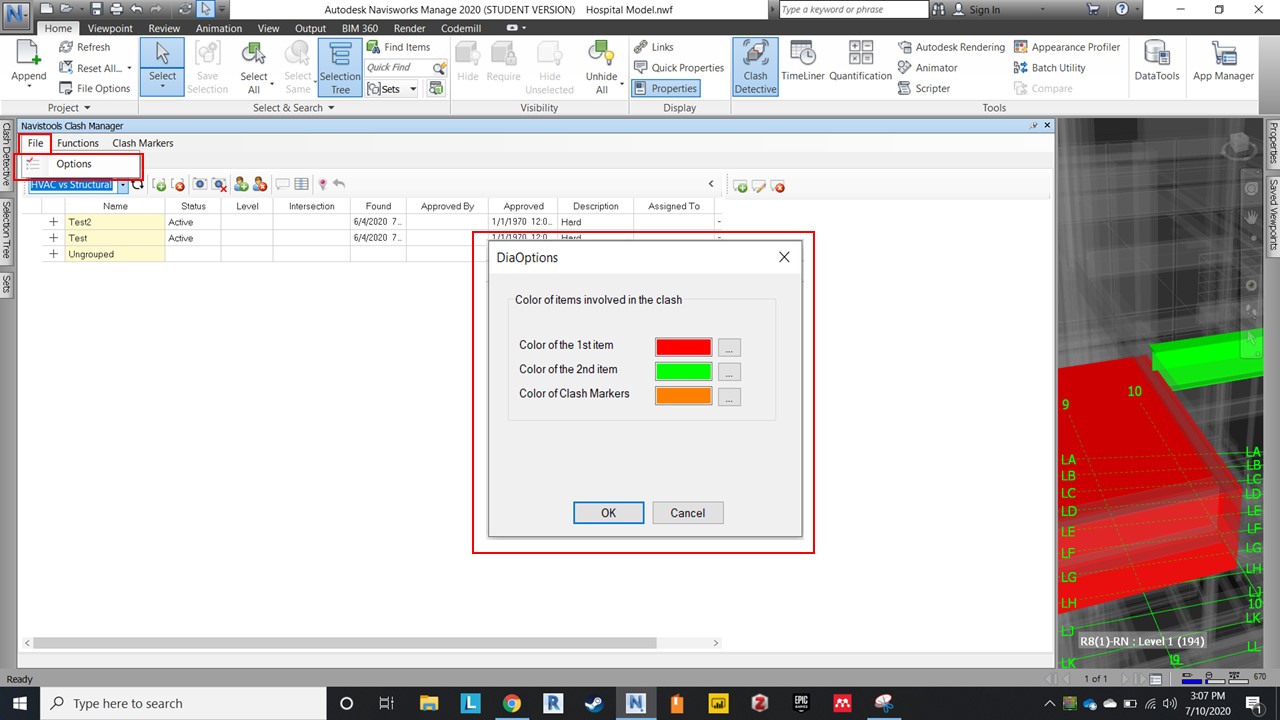 From the “Clashes” tab, users can select which clash test they would like to work on using a drop-down menu showing a list of clash tests pre-defined in Navisworks. (Figure 3). 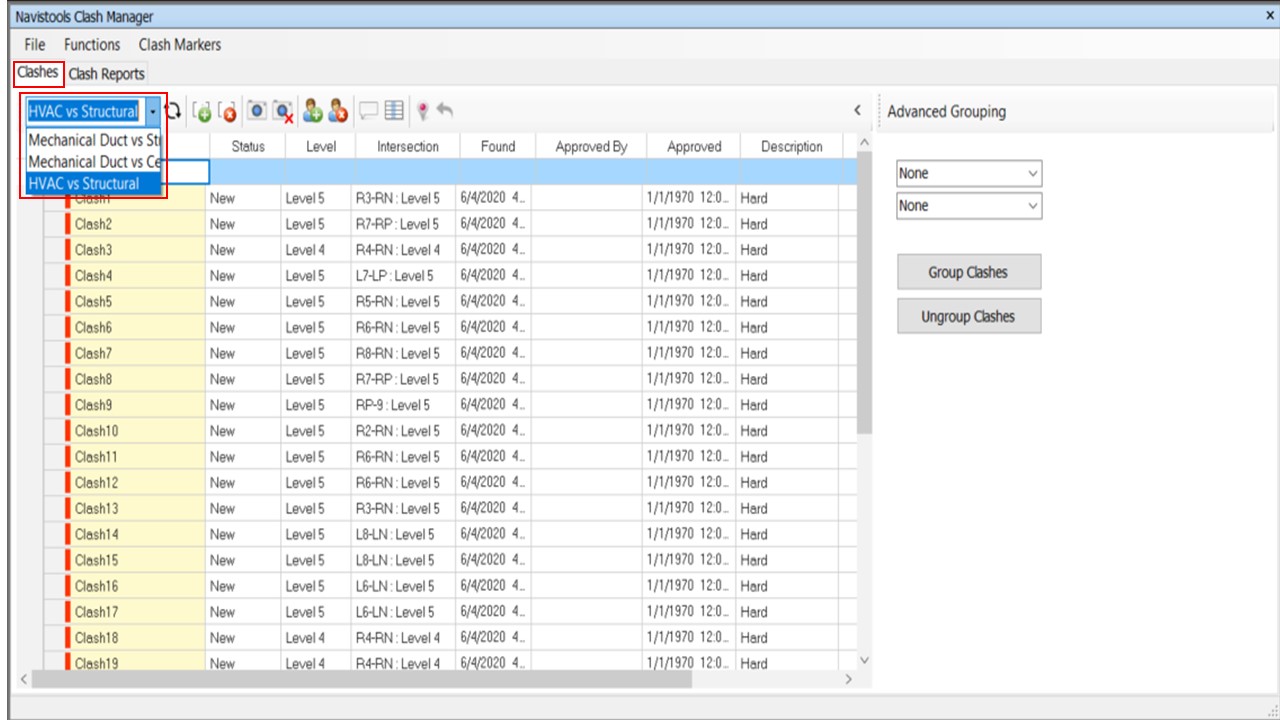 Default clash viewpoints are created automatically in Navistools Clash Manager. Users have the flexibility to manually change the current view and save it as a viewpoint by clicking on the “Add Viewpoint” button (Figure 4). These viewpoints are also automatically saved in Navisworks’ Clash Detective and can be imported to saved viewpoints using Navisworks Clash Detective’s “Write Report” function. Users can also remove the saved viewpoint by clicking on the “Remove Viewpoint” button in Navistools Clash Manager (Figure 4). 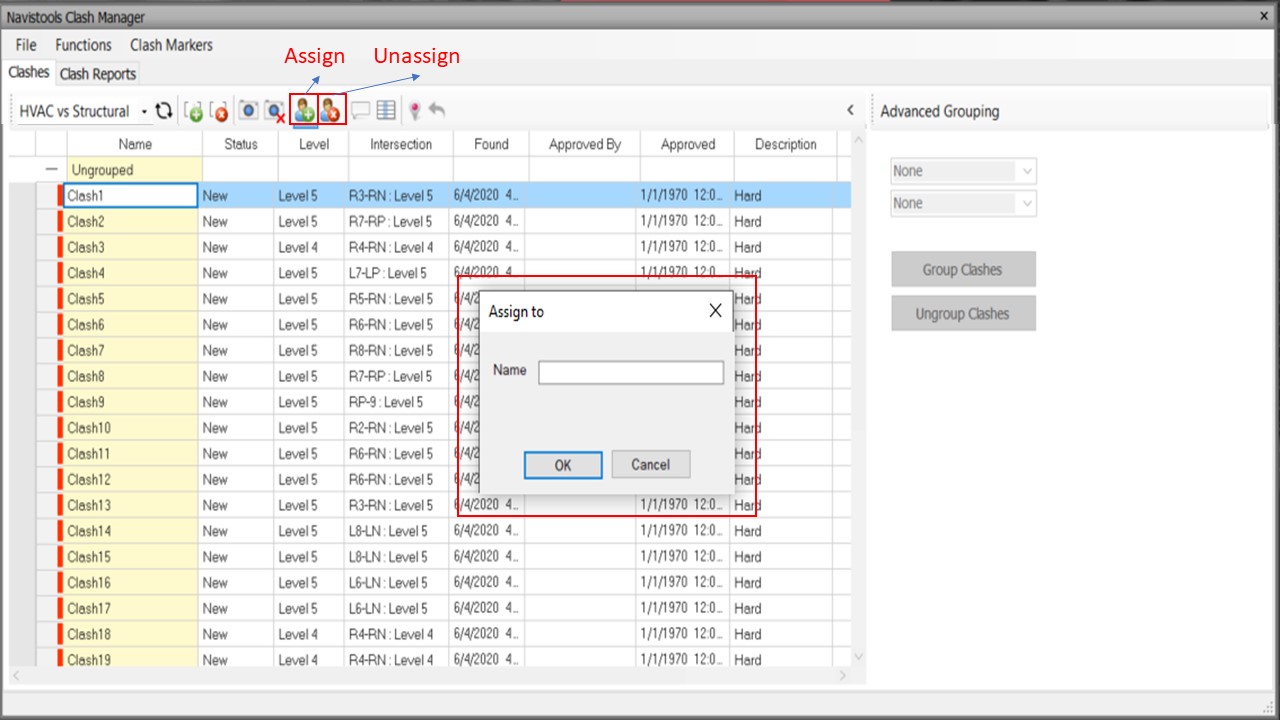 Using the “Comments” Button, users can add comments, edit comments, or remove comments for a clash (Figure 6). Once the user selects the “Add Comment” button, a comment panel will appear, allowing the user to add comments and change the status of the clash. Multiple comments can be added to a single clash. Once a comment is added, the user can edit and delete it using the “Edit Comment” and “Remove Comment” buttons. 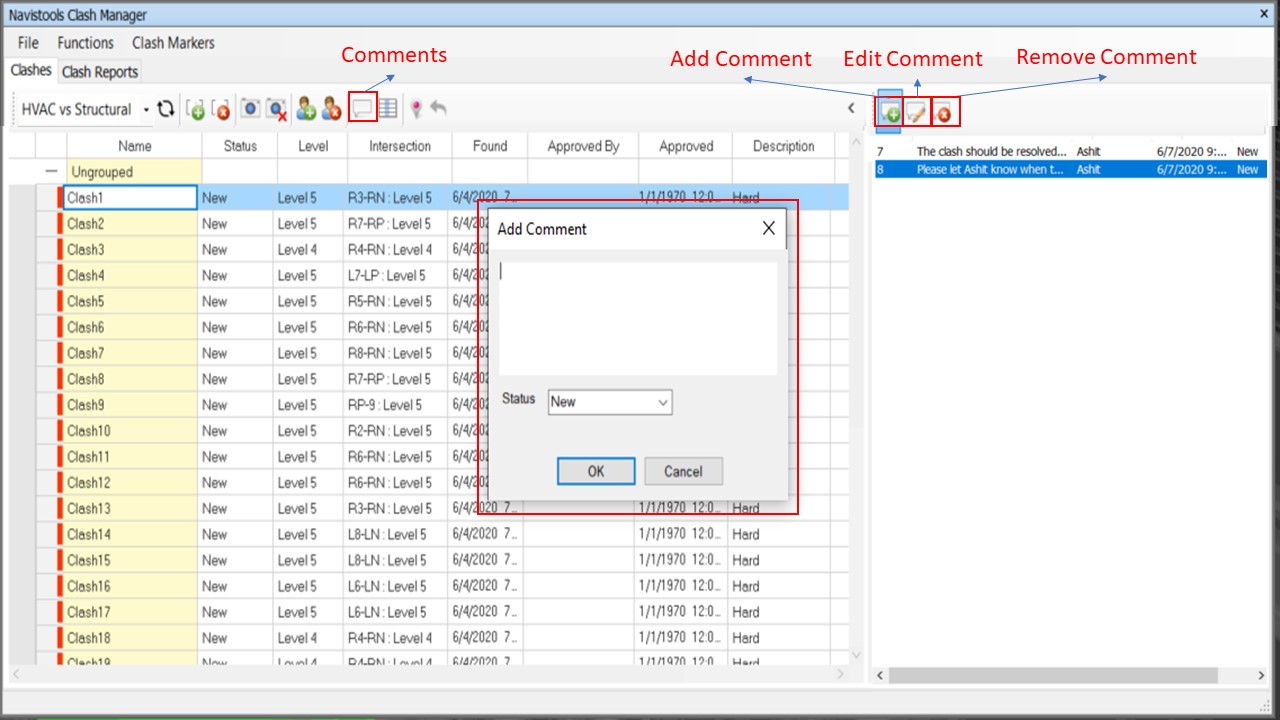 Figure 6: Adding, editing, and removing a comment to a clash.

Users can change the status of a clash from a drop-down status list menu for each clash (Figure 7). 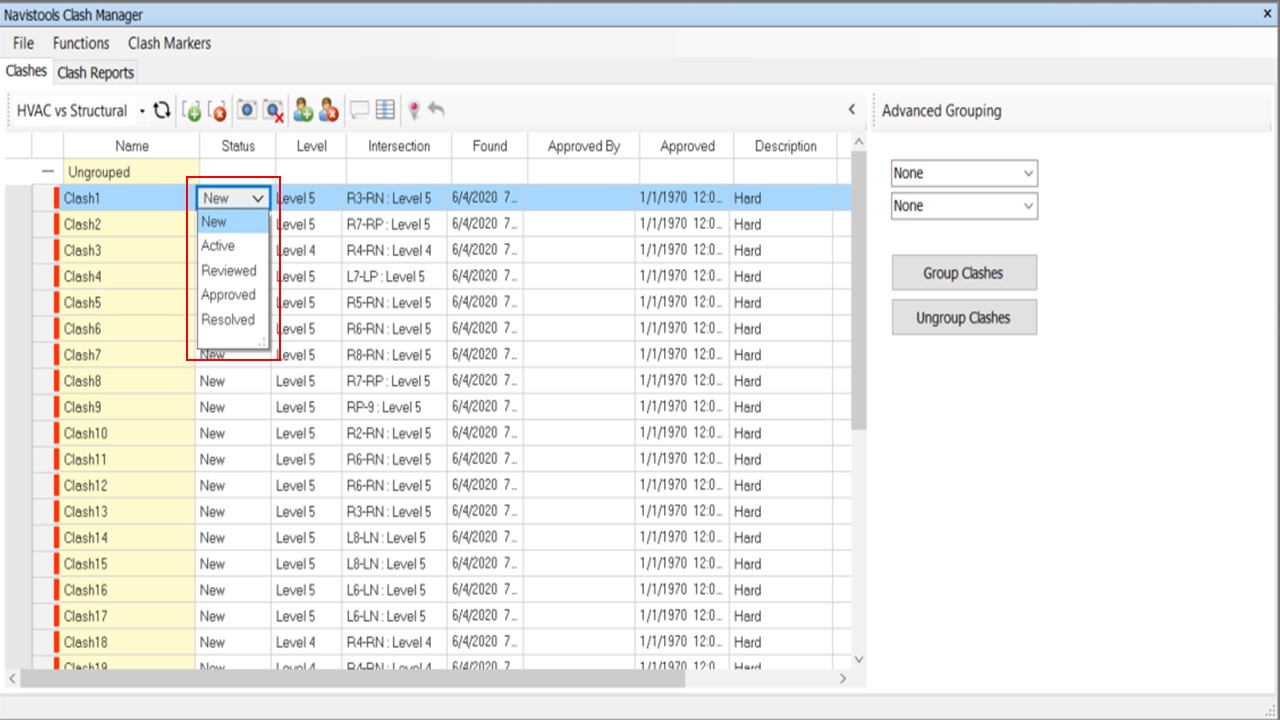 Figure 7: Changing the status of a clash.

Using the “Functions” menu, users can re-run the selected clash test by selecting the “Re-run the Test” option (Figure 8). 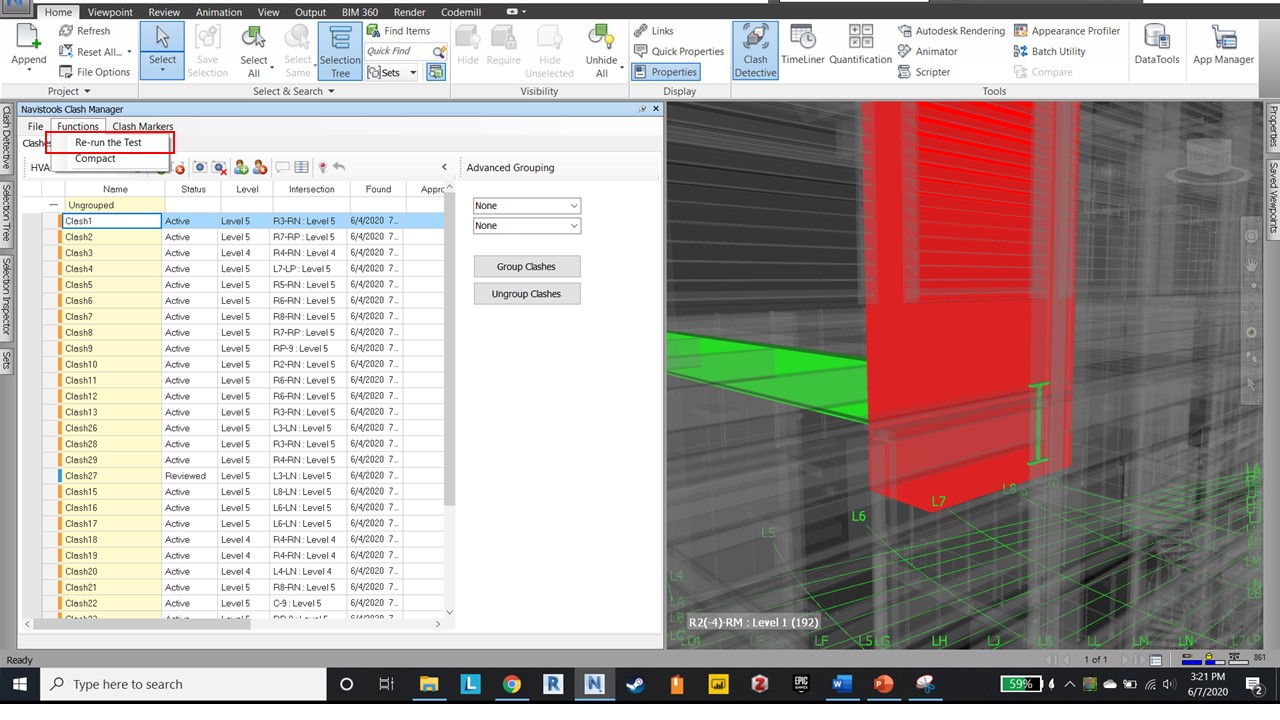 Selecting the “Compact” option in the “Functions” menu allows users to remove all resolved clashes from the clash test (Figure 9). 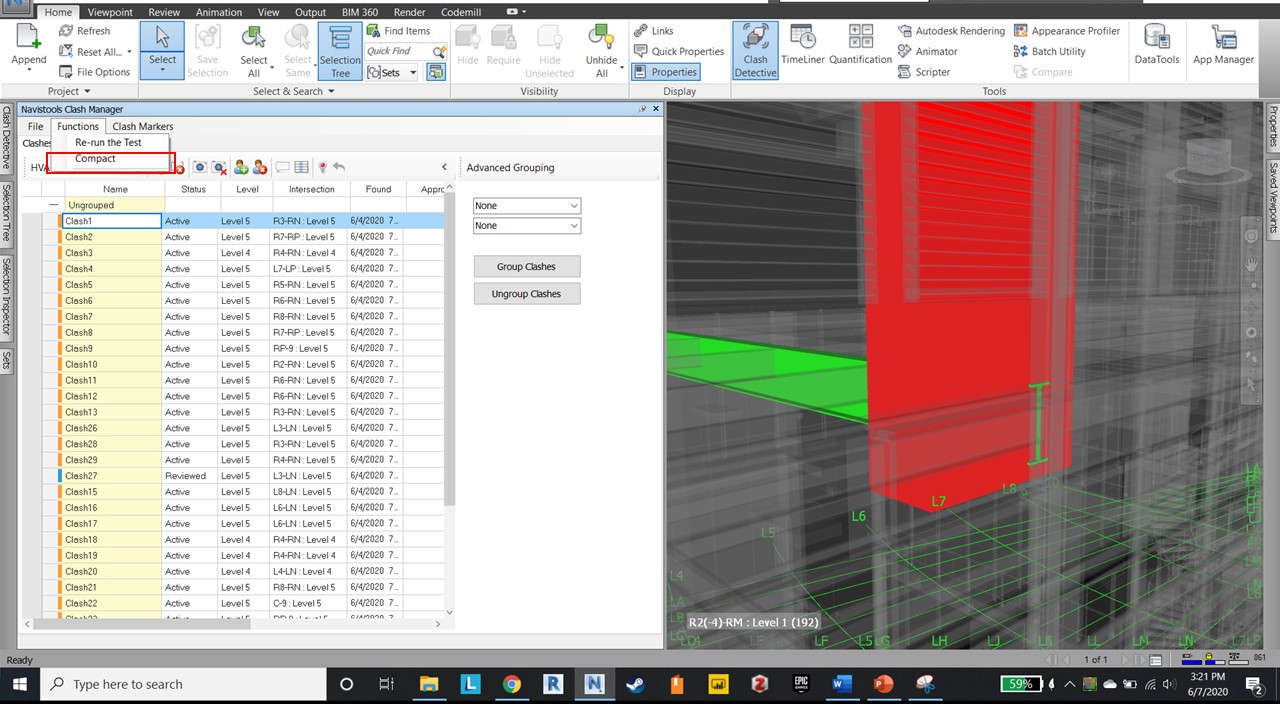 From the “Clashes” tab, selecting the “Display Clashes Only” button allows users to hide all elements not involved in a clash while displaying only the elements involved in the selected clash (Figure 10). 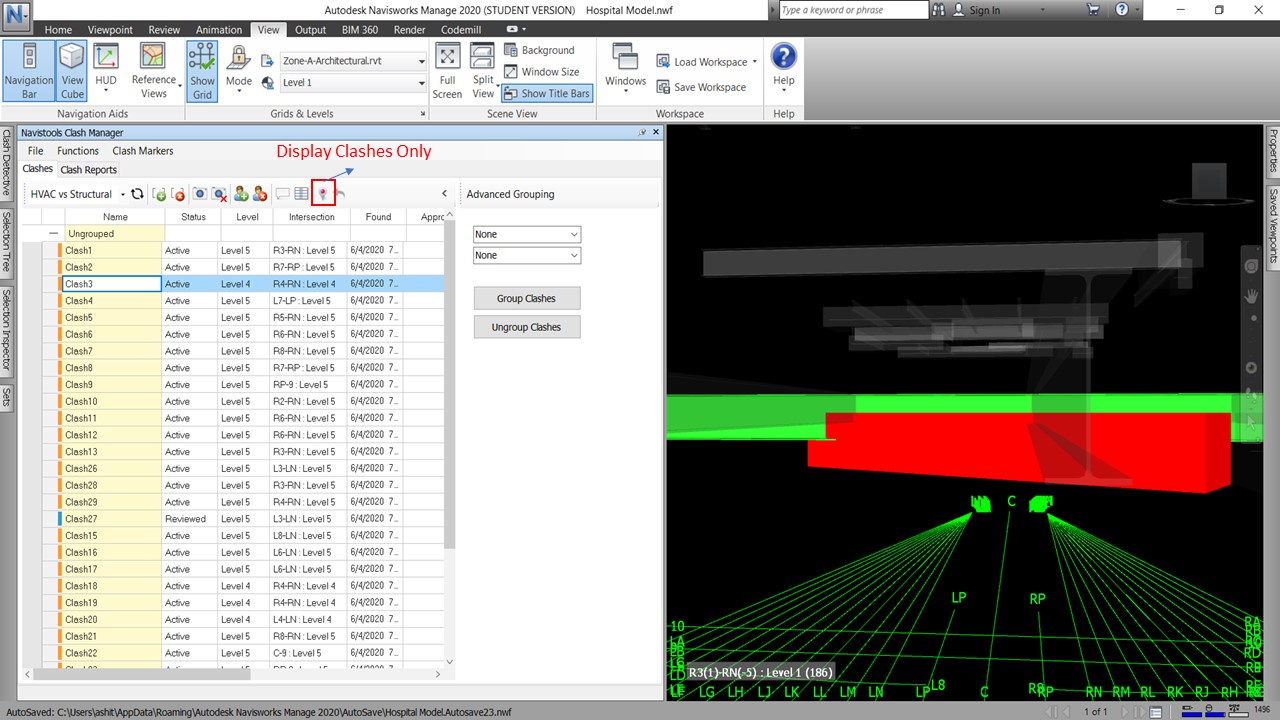 Figure 10: Displaying only the elements involved in a clash.

From the “Clashes” tab, selecting the “Reset Override” button will unhide all objects in the model (Figure 11). 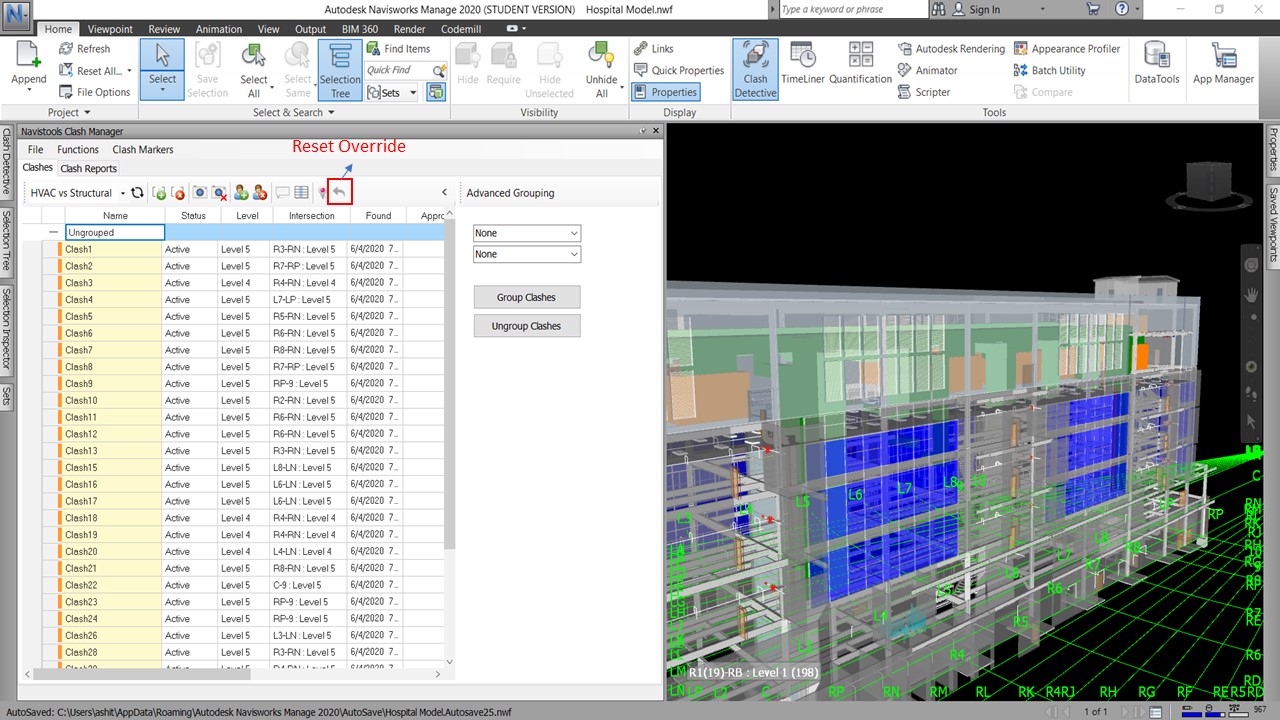 Navistools Clash Manager allows users to group clashes either automatically or manually. Clash grouping functionality can be used to manage clashes based on the status, assigned to, and approved by properties. Any changes made to these properties are applied to all the clashes within the group.

Navistools Clash Manager allows users to group clashes automatically by selecting up to two criteria from a list. These criteria help users group clashes based on clash location, responsible person, and clashing elements. The automatic grouping of clashes facilitates a streamlined clash coordination and resolution process. Users can quickly assess if a clash is unique resulting from a conflict between two objects or if the clash is part of a group of clashes resulting from conflicts between multiple objects. This grouping feature helps to accelerate the clash resolution process by quickly identifying the total number of unique clashes in the model.

Using the “Advanced Grouping” option from the “Clashes” tab, users can automatically group clashes using one or two criteria. For each criterion, the user can select from a drop-down menu of several criteria to group clashes. These include: Level, GridIntersection, SelectionA, SelectionB, AssignedTo, ApprovedBy and Status. SelectionA and SelectionB denote the two elements that are being tested against each other during a clash test. 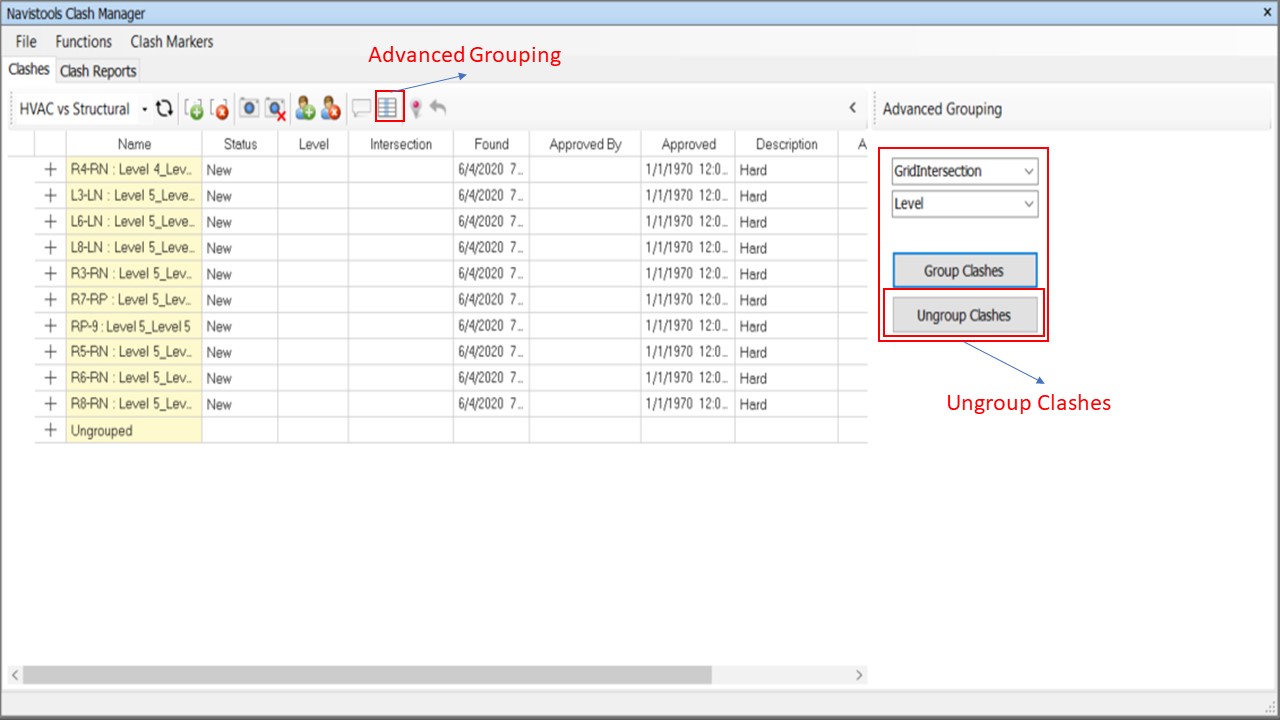 There are two distinct ways of manually grouping the clashes. The user can either select multiple clashes from the clash list and group them together using the “Group Selected Clashes” button (Figure 13). Once the user selects the “Group Selected Clashes” button, they can provide a name for the clash group created. (Figure 13). Ungrouping clashes can be done using the “Ungroup selected group” button. 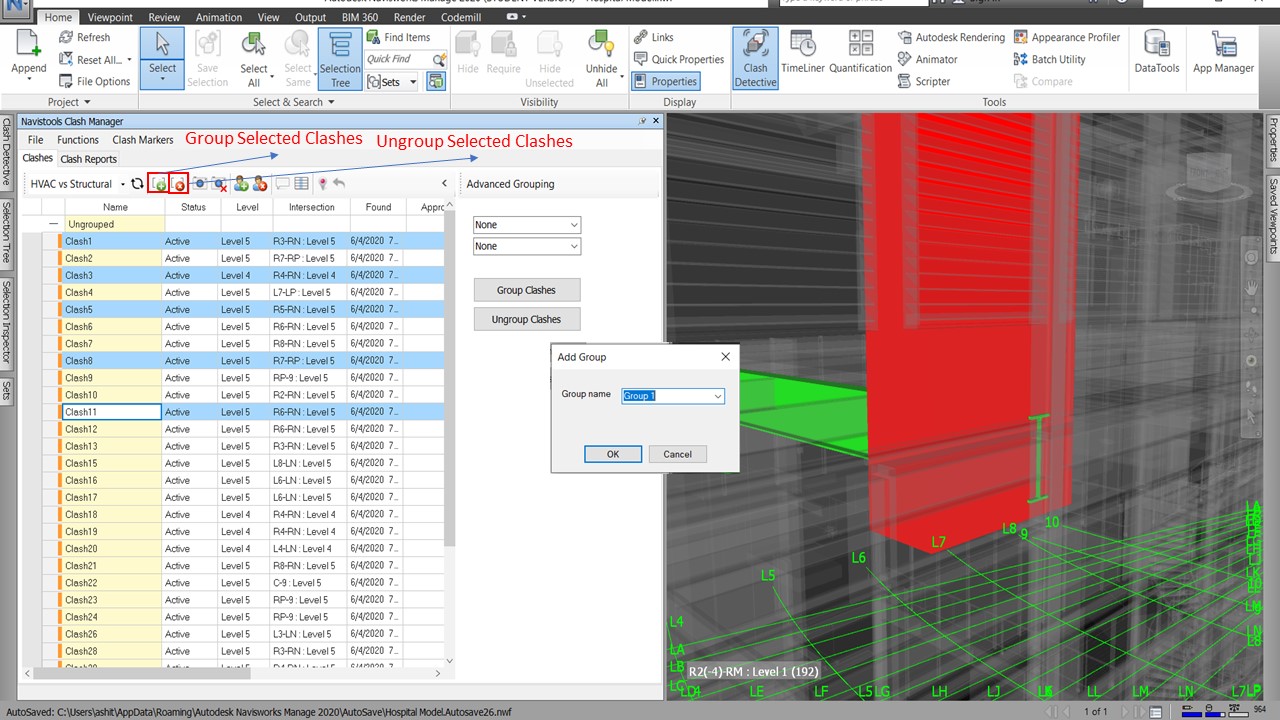 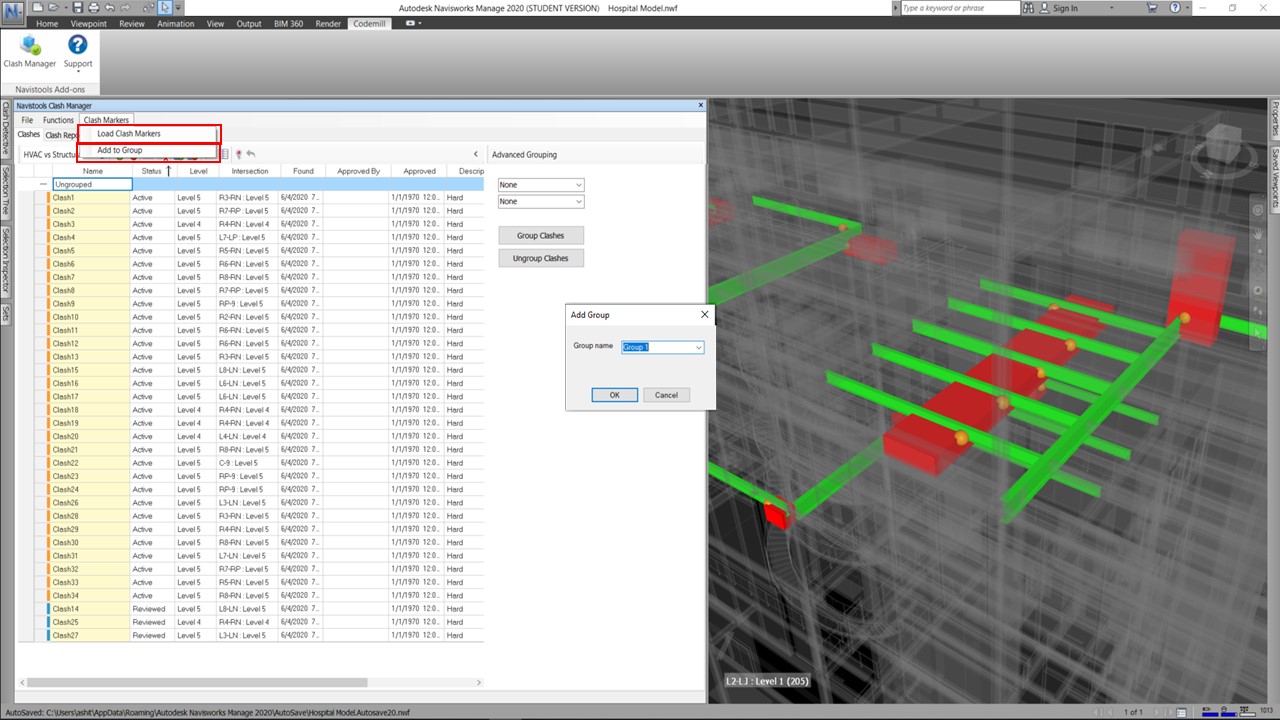 Through clash markers, Navistools Clash Manager has introduced a new method of selecting and visualizing clashes. Though clash markers are currently being used only to manually group clashes, their use needs to be expanded. Expanded use can include clash markers being used to automatically group clashes based on proximity. This will allow users to see how clashes in an area affect each other and how clashes can be resolved. Creating a section box around clash markers can be another expanded use to allow users to identify the elements surrounding a clash. Users can use this information to resolve clashes.

Using the “Clash Report” tab (Figure 15), the user can select “Populate TreeView” to view all the clashes in the clash test, then select the clashes they want to use to generate a clash report from the tree view. The tree view will mimic the group structure for the clashes in the “Clashes” tab. Once the desired clashes are selected, the user can click on the “Create Clash Report” button to create the report. Users also have the option to view the clash report directly in Acrobat Reader by selecting the “Open Clash report in Acrobat Reader” button. 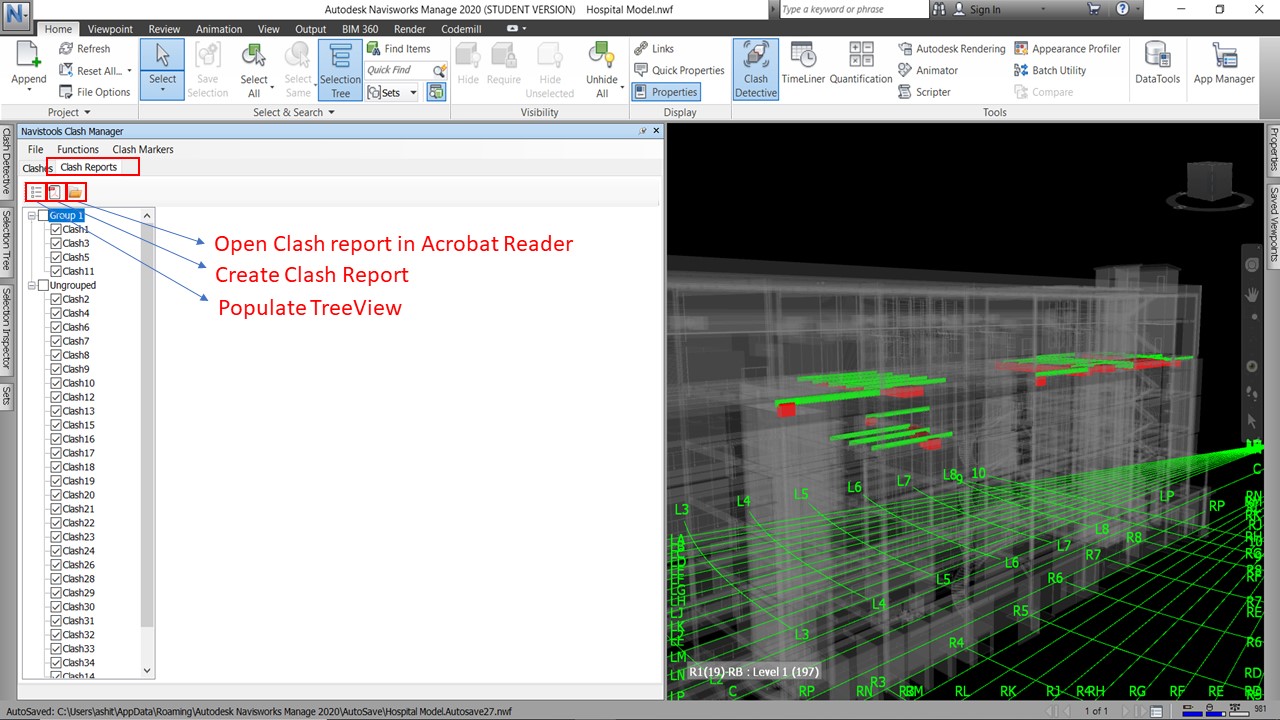 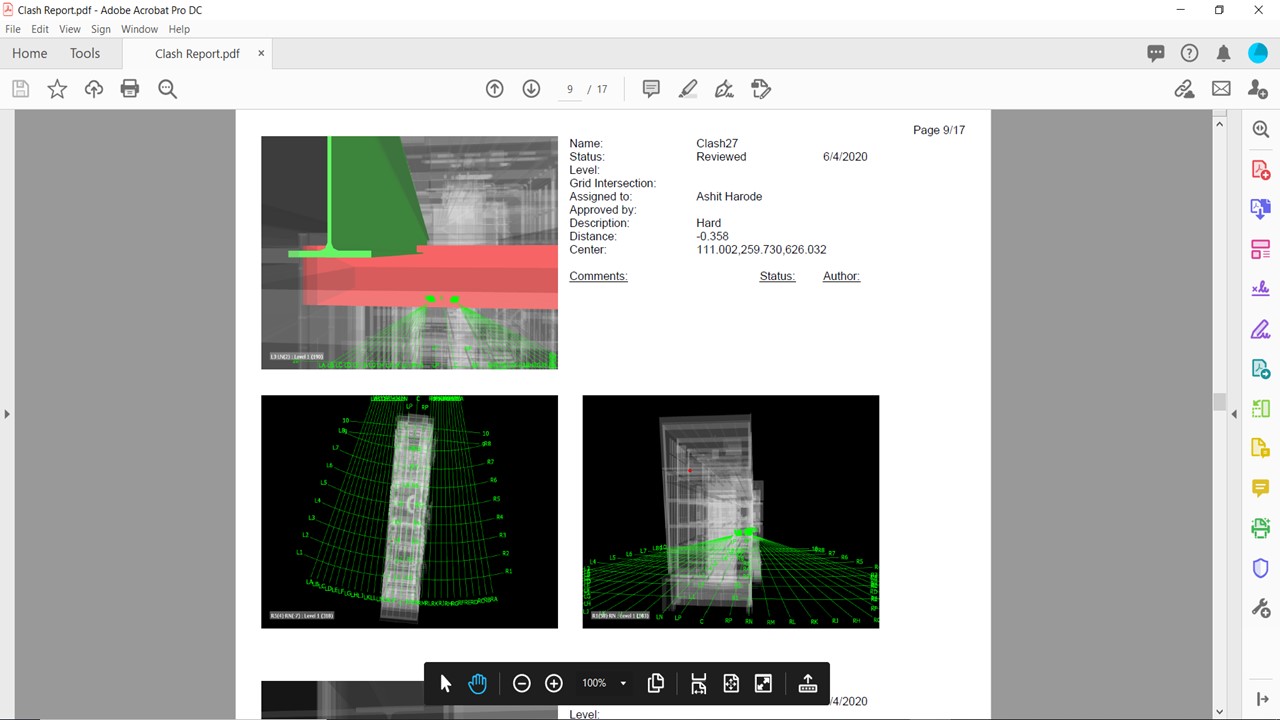 Figure 16: The clash report that is generated.

Some suggestions for the future improvement of the tool are listed below.

Currently, when the “Display Clash Only” button is selected, the Navisworks view displays the clashes with the currently selected clash being highlighted, and the other clashes displayed in an x-ray view. However, this view resets and changes to the Navistools Clash Manager’s default view as soon as another clash is selected. It would be helpful for the user if the “Display Clash Only” option, once selected, becomes permanent unless the option is turned off.

Expanding the use of Clash Marker

The clash markers are a great and smart way for grouping clashes. But their use is restricted to manual grouping of clashes. The use of clash markers can be expanded to automatically group clashes in the vicinity or in the radius of a clash. This functionality can be useful in cases where the user wants to see if similar clashes exist around a clash and assess the effect of each clash on its surrounding clashes.

Navistools Clash Manager currently lacks any functionality in terms of filtering clashes. Filtering clashes based on current selection can be an effective tool while handling a large number of clashes. Filtering functionalities such as showing only the clashes that includes all the currently selected elements or showing only the clashes that includes at least one of the currently selected elements can be a useful filtering option. 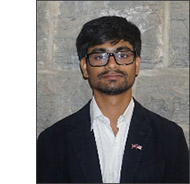 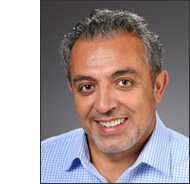